A protest near the University of Central Florida staged by more than a dozen self-proclaimed Nazis on Sunday drew criticism from Republican U.S. Sen. Rick Scott, Democratic Orlando Mayor Buddy Dyer, and other elected leaders who issued statements declaring that antisemitism and hatred have no place in Florida. The demonstrations took place a week after antisemitic flyers were distributed to hundreds of homes in two South Florida cities with large Jewish populations.

The group, decked out in Nazi garb yelled antisemitic slogans outside a Florida shopping plaza and waved swastika flags from a highway overpass before authorities broke them up. 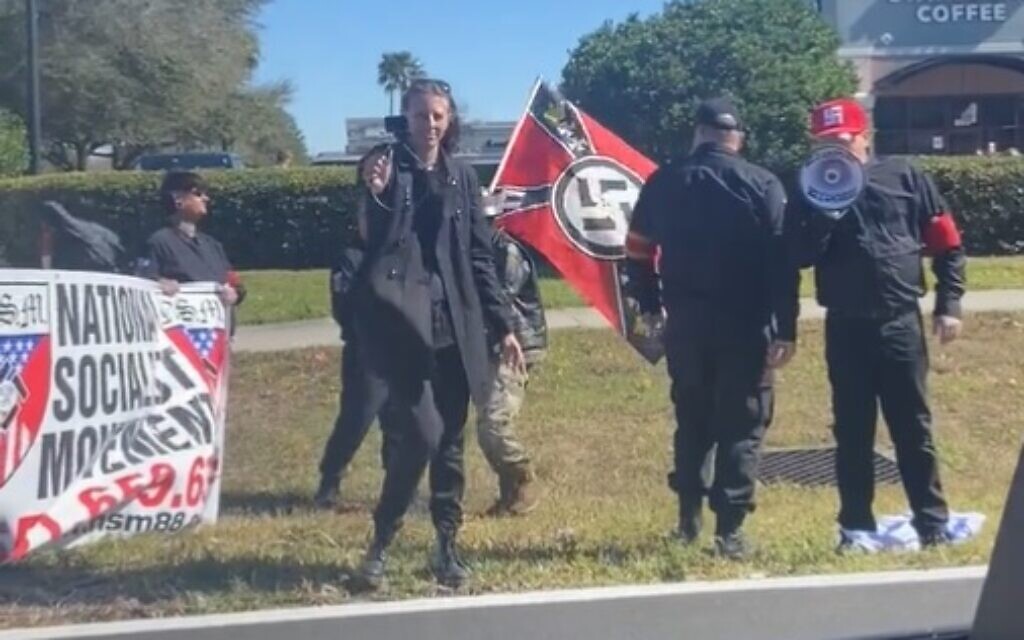 During Saturday’s demonstration, some participants got into a fight with a passerby, but no arrests were made and an investigation is ongoing, according to the Orange County Sheriff’s Office.

Nazi rally over I4 in Orlando pic.twitter.com/0tIHYxgF97

Authorities from the Florida Department of Highway Safety and Motor Vehicles and the Florida Highway Patrol said in a statement that they and sheriff’s deputies had disbanded the group on the overpass Sunday.

Local Democratic lawmakers said they were appalled by the demonstrations and urged Republican Gov. Ron DeSantis to condemn the demonstrators. The governor’s spokeswoman, Christina Pushaw, said in a tweet that Democrats were insinuating that DeSantis’ policies were responsible for the demonstration. Pushaw also at first questioned if the demonstration might be “staged.” But she deleted that tweet, saying in a later tweet, “I admit I don’t know who staged the protests in Orlando and waiting for law enforcement to confirm.”

Florida Gov DeSantis’ press secy has me blocked, so I’ve gone to some trouble to let you see what she tweeted in response to confirmed reports of Nazi’s on Orlando streets this weekend pic.twitter.com/HMu1QyRiSp

Later in the day, at a news conference in Palm Beach County, DeSantis angrily denounced attempts to tie him and the Republican Party to the Nazi protesters. He said Florida law enforcement agencies were trying to determine who the demonstrators were because they violated state law by hanging banners from overpasses. “These Democrats who are trying to use this as some type of political issue, to try to smear me as if I had something to do with it. We are not playing their game,” DeSantis said.

Anti-semitism has been on the rise in America for the last several years, with Trump supporters marching in Charlottesville and other cities embracing Nazi culture. Nazi imagery was on vivid display during the January 6th Capitol riots, and Republican members of Congress have displayed anti-Semitic behavior and shared tropes on their social media accounts.

.@GovRonDeSantis, when you say "they" you're talking to me. I am a Jewish citizen of Fl who is deeply offended by @christinapushaw & her response & history of comments. Your press sec is the reason you are getting blow back. You just made it worse.pic.twitter.com/cL5TXt9bAe

WATCH: How Do You Enforce An Abortion Ban — And Why Can’t This GOP Senator Answer The Question?

Twitter users angrily let Pushaw and others know how unacceptable it was to blame a Nazi protest on anything except the rise of Nazism in America.

.@GovRonDeSantis mouthpiece @ChristinaPushaw is trying to pass the #nazis in Orlando this weekend off as paid Dem actors. Idk many “actors” so committed to their role that they start beating people in the streets. Free speech ends when the violence starts. pic.twitter.com/qgS2Brhw3B

It's really not quite accurate. It's called "Trumpism," and quite frankly DeSantis and his staff are all premium card carrying members.pic.twitter.com/wPf7Fff3qM