We Must Be Prepared for Election Week, Not Election Night

The 2020 Presidential election is not like any other election America has witnessed. It involves President Donald Trump as the incumbent for one, a worldwide pandemic, foreign influence and record amounts of mail-in ballots. For those reasons, America might not know who has won the election on the night of November 3 or even within a few days of “election night.”

Instead, think of November 3 as the beginning of election week. The first Tuesday in November might be the last day to vote, but that does not mean it will be when all the votes have been counted and the election winner is confirmed. It might be far from it.

Due to the coronavirus pandemic, people are voting by mail in record numbers. Nearly 50 million people have already voted as of Friday and close to half of all the votes in the primary elections were voted by mail or early voting, according to the Pew Research Center.

Only 13 states have specific rules that allow ballots to be counted before November 3. In the other states, it is either not allowed or up to the discretion of local officials. So what does that mean? It is literally impossible for every single vote to be counted on election night. If all the votes aren’t counted, then a winner can’t be confirmed with 100 percent accuracy on election night.

“Mail ballots pose a challenge to election workers because they must be manually removed from their envelopes and verified as valid before they can be fed into the tabulating machines,” said Pew Research Center’s Drew Desilver. “Although election workers in at least 32 states can start processing ballots (but not, in most cases, counting them) a week or more before Election Day, these counts may not be finished by election night depending on how many come in. In a half-dozen states, including the battlegrounds of Pennsylvania and Wisconsin, processing can’t start until Election Day itself.”

Votes that arrive after election day, but were postmarked before election day, can still be counted in many states as well. As such, the entire electoral process can take a long time. The Pew Research Center described the lengthy process wonderfully.

According to federal law, each state will have until Dec. 8 this year to resolve any “controversy or contest” concerning the appointment of its slate of electors under its own state laws. That effectively gives states more than a month after Election Day to settle any challenges to their popular votes, certify a result and award their electoral votes. If they do so by this “safe harbor” date, Congress is bound to respect the result.

The electors will meet in their respective states on Dec. 14 – officially, the Monday after the second Wednesday in December – and formally cast their votes for president and vice president. The Constitution expressly forbids them from meeting as a single nationwide group, a provision the Framers put in to reduce the chances of mischief. The electors are supposed to vote for the candidates whose name they were elected under – in fact, 32 states (plus D.C.) have laws intended to bind the electors to their candidates. The Supreme Court this summer unanimously upheld such laws.

The newly elected 117th Congress will be sworn in on Jan. 3, 2021. Three days later, it is supposed to assemble in joint session to formally open the electors’ ballots, count them and declare a winner. Only then is the president officially “elected.”

The election has never been decided on Election Night officially. Media organizations were able to predict who was going to win by using the already counted votes to model the rest of the results. But, that was when many of the votes were cast on election night and were able to be counted immediately. As such, a lot of the data came in at once making it easier to forecast the end result with high confidence. But with the increase in mail-in ballots, it isn’t possible to forecast the results with high accuracy on the night of the election unless it is a landslide victory for one candidate.

If the election is close, no one should expect the results to be decided the night of. There are many mail-in ballots that need a human to take it out of the envelope and count it. And there are now record amounts of mail-in ballots in the tens of millions. For the process to be credible, which it is, it will take some time to individually confirm all the ballots to make sure democracy worked and the American people selected the next president of the United States.

For more on what election night might look like, NPR has a video explaining in just four minutes why America may not know who won the 2020 Presidential Election on November 3. It is worth the watch and just remember. If a winner isn’t decided on Tuesday night, it is no reason to freak out. The votes are being counted and the democratic system is working. It just takes time.

Below is a great graphic showing the deadlines of when each state can accept mail-in ballots, thanks to the Pew Research Center. As you can see, many votes can still be counted after November 3 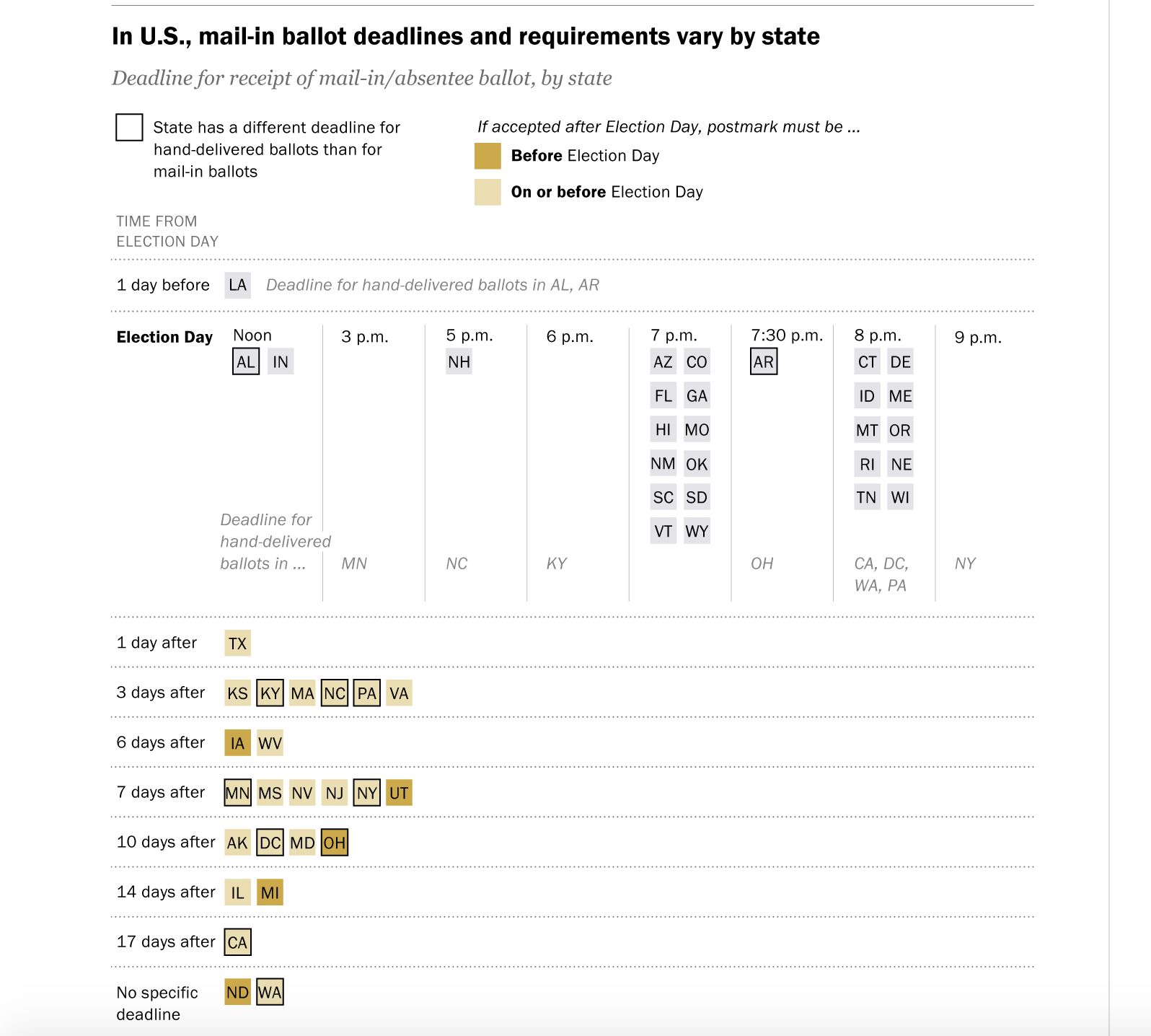 Ryan is a student at the University of North Carolina at Chapel Hill majoring in Business Journalism. He has written in the past for SB Nation’s Silver and Black Pride, USA Today Sports Media Group, North Carolina Business News Wire, the Daily Tar Heel, and has worked with Ice Cube’s BIG3 basketball league. Ryan is also a regular contributor to MeidasTouch.com