The morning after its first televised hearing, President Joe Biden said the January 6th House Select Committee’s live broadcasts of the findings of their investigation are “about democracy itself,” stressing that it’s important for Americans to understand exactly what transpired.

The President also said the hearings show “how the battle for the soul of America has been far from won.” 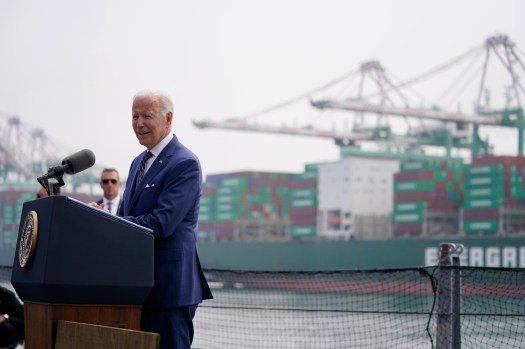 Speaking at the Port of Los Angeles, the President said he had not yet had the chance to watch Thursday’s first prime-time hearing himself, but had of course been briefed. He urged everyone to make time for the hearings. “It’s important the American people understand what truly happened and to understand that the same forces that led January 6th remain at work today,” President Biden asserted during his remarks.

“But I know together … we can unite and defend this nation, Democrat and Republican, allow no one to place a dagger at the throat of our democracy,” he continued. “That’s what those hearings are all about. You’re gonna hear a lot more.”

Ahead of the first of six televised hearings, the President said of the actions taken by Trump supporters on the day of the insurrection, “I think it was a clear, flagrant violation of the Constitution. I think these guys and women broke the law — tried to turn around a result of an election and there’s a lot of questions, who’s responsible, who’s involved.” But the President also added that he would not make a “judgment” on who was involved.