Transportation Secretary Pete Buttigieg, who seems to be signaling another Presidential run with a move to the key battleground state of Michigan, defended abortion rights protesters who gathered outside of a restaurant where Justice Brett Kavanaugh was dining, saying they were exercising their right to free speech.

What’s even better, he did it during an appearance on “Fox News Sunday,” calmly laying out his case and ignoring host Mike Emmanuel’s repeated attempts to interrupt and inject more Fox “whataboutisms.” 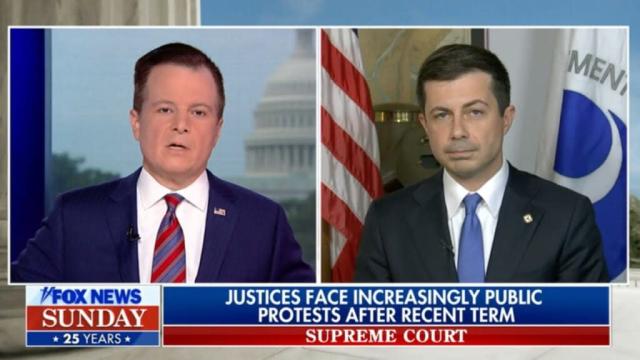 Kavanaugh was eating at Morton’s Steakhouse last week when protesters gathered outside the venue and called the manager to have Kavanaugh, who joined the Supreme Court’s majority opinion overturning Roe v. Wade, kicked out. The protesters never entered the restaurant and Kavanaugh never saw them. Instead, he left through a rear exit rather than be forced to confront the crowd. This was apparently too much for Emmanuel, who tried and failed spectacularly to gotcha Buttigieg, which simply cannot be done.

Pete Buttigieg will be our President someday, oh yes he will @SecretaryPete @chasten

“When public officials go into public life we should expect two things. One, you should always be free from violence, harassment, and intimidation. And two, you’re never going to be free from criticism or peaceful protests, people exercising their First Amendment rights,” Buttigieg said. “That’s what happened in this case. Remember the justice never even came into contact with these protesters, reportedly didn’t see or hear them,” he added.

We need more Democrats to do exactly what Pete Buttigieg did today on Fox.

Fox News Sunday: "Gee, I wish Pete Buttigieg would hand me a plate full o' my own ass today."

“These protesters are upset because a right, an important right that the majority of Americans support, was taken away,” Buttigieg continued as if explaining to a toddler that they can have a cookie AFTER dinner. “Not only the right to choose, by the way, but this justice was part of the process of stripping away the right to privacy.”

We will never get over watching Pete Buttigieg humiliate Fox News.

You really have to enjoy the spectacle of the Secretary of Transportation steamrolling over a Fox News host. Buttigieg wouldn’t let Emmanuel get in a word as he conducted a master class in How to Speak Truth to Power On Fox Without Looking Like A Yelly Lunatic. So enjoy it!

Fox’s Duffy: Teachers Should Make Less Money Because They Don’t Work as Much [VIDEO]