At the end of every broadcast of the January 6th House Select Committee’s hearings, Vice-Chair Rep. Liz Cheney has succinctly summed up the day’s testimony while previewing the next hearing. All that’s been missing is a manly voiceover intoning, “Next time, on the January 6th Hearings…” But Cheney doesn’t really need it, because she knows how to lay a down a breadcrumb trail of tantalizing new evidence to keep us following along until the prime-time finale conclusion set for next week.

Tuesday’s hearing was no exception, delivering on the promise of clearly demonstrating the direct ties between Donald Trump and militia groups such as the Oath Keepers and the Proud Boys. A former member of the Oath Keepers, Jason Van Tatenhove–who also lived with its leader, Stewart Rhodes for eight months–testified that despite efforts to reframe itself as anything but a ‘militia,’ “The Oath Keepers are a violent militia and they are largely Stewart Rhodes.” 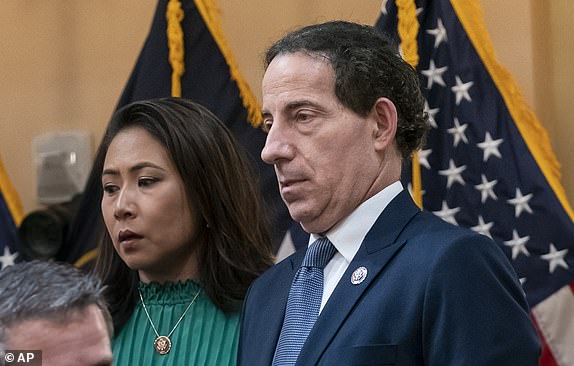 Committee members Rep. Stephanie Murphy (D-FL) and Rep. Jamie Raskin (D-MD) both did fantastic work recounting the interactions between members of the militias with Trump’s inner circle, including breaking down the planning sessions at the White House that saw a dubious cast of characters assembled in the Oval Office a week and a half before the Capitol riot. During the interview portion of the hearing, Stephen Ayres, who pleaded guilty in Ohio for his role in the insurrection, testified to how he felt before, during, and after January 6th. Ayres also admitted he wouldn’t have gone to DC on January 6th if he’d known that Trump knew he lost the election.

Jamie Raskin: Trump is still promoting the big lie, how does it make you feel?

Stephen Ayres: It makes me mad.

(His wife is also ALL OF US) #January6thCommitteeHearings pic.twitter.com/YP3wPdaUkv

We also learned that the march to the Capitol was in no way spontaneous, with Trump’s allies coordinating at several meetings, including an Oval Office meeting that sounds like the Qrazy Qlown Car exploded. That sweet sweet Pat Cipollone testimony just kept giving, and we haven’t yet heard all we’re going to hear from him.

You can't have a coup without henchmen. Trump, Rudy Giuliani, Sidney Powell, Michael Flynn, Roger Stone, and Alex Jones nearly took us down.

But the biggest bombshell came from Cheney’s closing statement, where she dangled the biggest cliffhanger of the season so far: the Committee has evidence that Trump called to intimidate a witness who has not yet been revealed to the American public. The person Trump tried to contact declined to answer or respond to his call, Cheney said. Instead, the person alerted their lawyer who contacted the Committee. Not only that, the panel has already been transmitting the information about the call to the Department of Justice, which could bring criminal charges against Trump.

BREAKING: The Jan. 6 Committee has been transmitting information about Trump potentially engaging in witness intimidation to the Justice Department. pic.twitter.com/MsurmiIyA7

There’s a lot to unpack from today’s hearings, but for now, let’s go with Trump not listening to everyone telling him lost when he lost. What’s still missing for me is no one asking why the guy couldn’t just concede, but maybe we’ll find that out during next week’s Season Finale.