The House has voted to restore abortion rights nationwide in Democrats’ first legislative response to the Supreme Court’s landmark decision overturning Roe v. Wade. By overturning Roe, the court has allowed states to enact strict abortion limits, including many that had previously been deemed unconstitutional. Already, a number of GOP-controlled states have moved quickly to curtail or outlaw abortion, while states controlled by Democrats have sought to champion access. Voters now rank abortion as among the most pressing issues facing the country, a shift in priorities that Democrats hope will reshape the political landscape in their favor for the midterm elections.

The legislation passed 219-210. The House also passed a second bill to prohibit punishment for a woman or child who decides to travel to another state to get an abortion, 223-205. But the bill has little chance of becoming law, with the necessary support lacking in the 50-50 Senate. Yet the voting marks the beginning of a new era in the debate as lawmakers, governors, and legislatures grapple with the impact of the court’s decision. 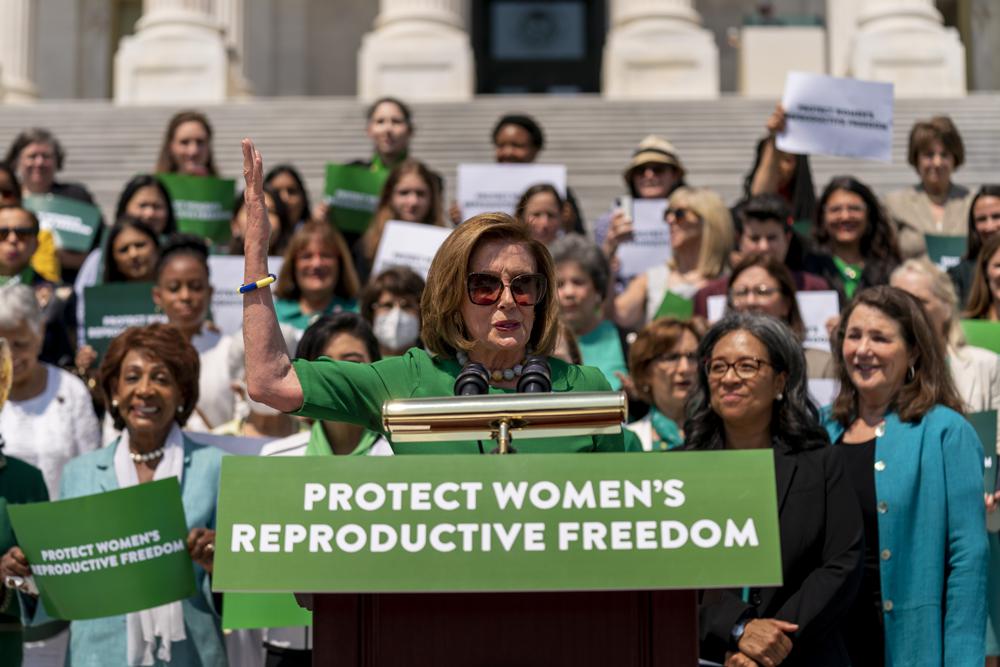 Ahead of the votes, House Speaker Nancy Pelosi (D-CA) gathered with other Democratic women on the steps of the Capitol. “Just three weeks ago the Supreme Court took a wrecking ball to the fundamental rights by overturning Roe v. Wade,” said Speaker Pelosi. “It is outrageous that 50 years later, women must again fight for our most basic rights against an extremist court.”

Join @DemWomenCaucus and me at the U.S. Capitol ahead of the passage of legislation to protect women's reproductive freedom and to stop Republicans from criminalizing women exercising their constitutional right to travel to obtain an abortion. https://t.co/yHypmYBTR5

The Democrats’ proposal would also prevent states from requiring providers to share “medically inaccurate” information, or from requiring additional tests or waiting periods, often aimed at dissuading a patient from having an abortion.

A woman’s health decisions are her own to make, not to be dictated by far-right politicians.
@HouseDemocrats will continue fighting ferociously to defend Americans' fundamental freedoms and ensure the central holdings of Roe v. Wade become the law of the land.

Republicans spoke forcefully against the two bills, praising the Supreme Court’s decision and warning that the legislation would go further than Roe ever did when it comes to legalizing abortion. Washington GOP Rep. Cathy McMorris Rodgers called abortion “the greatest human rights issue of our generation.”

I am asking you to tell me in detail about your last gynecological exam, because you're fine with women losing all rights to medical privacy #CodifyRoe #LouderThanMAGA

Democrats have scheduled more bills for passage in the coming weeks. Majority Leader Steny Hoyer (D-MD) said Friday that the House will vote next week on legislation guaranteeing a right to contraception.