Marjorie Taylor Greene has learned the art of manipulating her followers straight from the Master, the former guy. Greene’s attention-seeking tweeting is certainly working for her, as she’s been able to raise a startling amount of money along with raising her national profile. Greene’s latest stunting has her trying to leech fame from one of the most popular members of the House, Rep. Alexandria Ocasio-Cortez.

Now that Greene has “read all 14 pages” of the Green New Deal, she’s “ready” to debate AOC, whom she apparently only recently met despite being in the same place at the same time for the last almost five months.

Greene appeared at an “America First” event on Friday night where she related the story of how the debate came to be, and Twitter isn’t buying it. Twitter user PatriotTakes shared the video where Greene employs the very Trumpian tactic of rewriting a very recent moment in history that could very easily be fact-checked by the other person involved.

.@AOC, is this exactly how your interaction with @mtgreenee went regarding the debate on the Green New Deal? pic.twitter.com/kOLTwgieK1

Greene has long been obsessed with Ocasio-Cortez, and she seems impatient to get this debate scheduled, despite the fact that she’s the only one who thinks she’s qualified to participate.

Looking forward to debating you. #MTGvsAOC 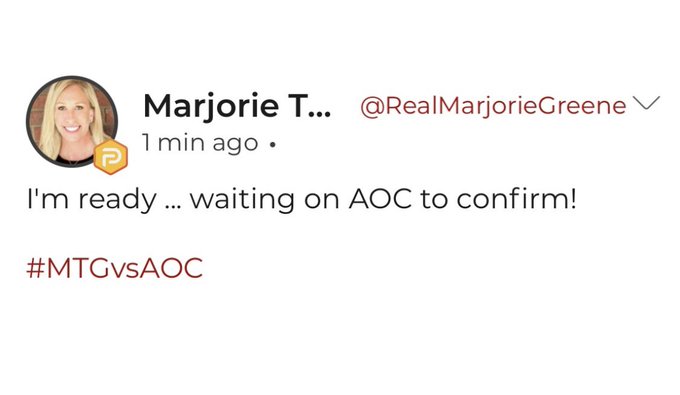 There are plenty of arguments for this to never happen.

Also: AOC should not debate MTG. There are people who should not be taken seriously as members of Congress, and whatever my policy disagreements with AOC, elevating MTG's profile is a mistake.

As much as id love to see Aoc destroy MTG with her grace and integrity about the green new deal it’s just a way for MTG to make a shit show with her despicable antics Aoc is about changing the world and helping human beings thrive. Mtg is about destruction.

MTG totally went the MAGA Mean Girl route when amping up her challenge, with immeasurable levels of projection language.

I’m glad I ran into you today @AOC to plan our debate about the Green New Deal.

After I finish reading all 14 pages, like we agreed, I’ll schedule time for our debate.#MTGvsAOC pic.twitter.com/viuH5Uj0oD

Rep. Marjorie Taylor Greene says that if @AOC doesn't accept her challenge to debate the Green New Deal, she'll be showing the world that she's just "a scared little girl that is pretty stupid and doesn't know anything about the economy or economics." pic.twitter.com/ZoNOUsQlPd

Good morning. Just felt like sharing my passion for photo editing on this Thursday morning. 😂😂 pic.twitter.com/xefdpyUhhV

No one doubts it would be entertaining to watch Ocasio-Cortez handily own Greene, but we put the over/under on this happening at a firm 99/1. Rep. Ocasio-Cortez hasn’t publicly responded to the debate challenge, probably because she’s been so busy doing her job.

Join us for our town hall happening RIGHT NOW!