This weekend’s “Insurrection Reunion” at the Trump Doral property in Florida served up all of the imagery one might expect from an event sponsored by Amy Kremer’s criminal enterprise, Women For America First. Aside from beleaguered Congressman Matt Gaetz making all the verbal faux pas he could in one speech, the event also featured appearances from such right-wing faves as Marjorie Taylor Greene and Rand Paul.

Thanks to Trump successfully pushing his “Big Lie” about election fraud along with conservative lies about the insurrection, many of his supporters are now convinced that the riots never even happened and that it was a purely peaceful protest, despite all of the video evidence pointing to the exact opposite.

And while no one would have expected any intelligent commentary from any of the attendees, CNN’s Donie O’Sullivan found a woman who is the living embodiment of all of MAGA and QAnon combined. 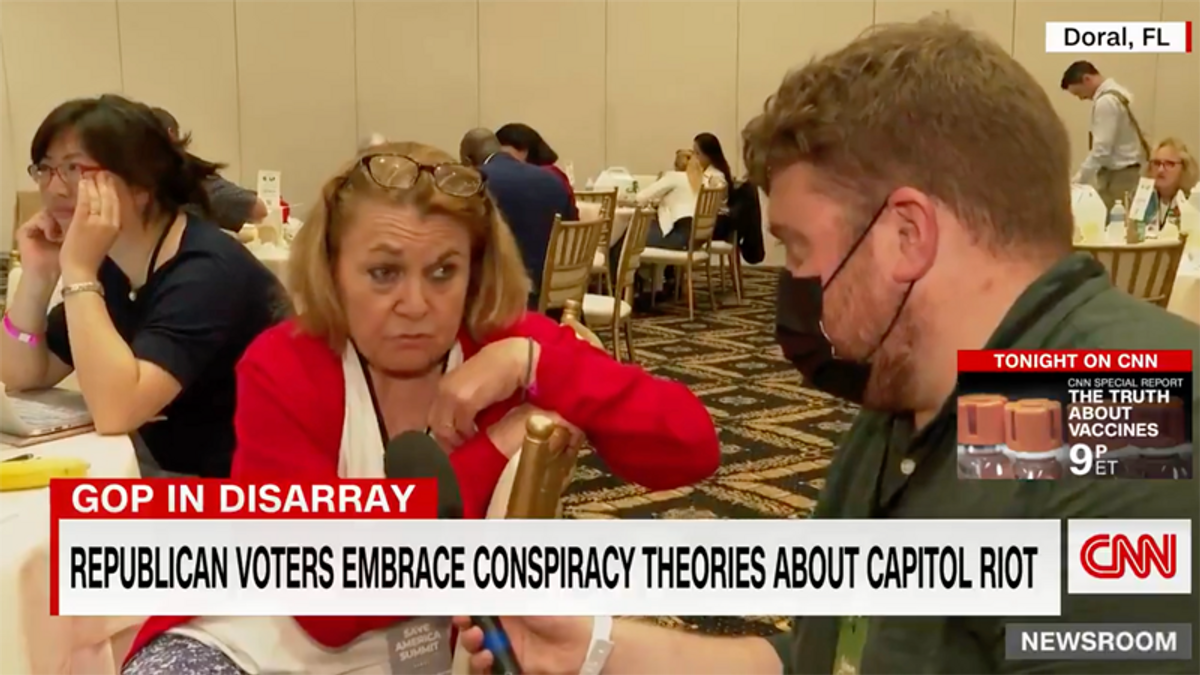 The woman, who has one of those “of course she’s a Trumper” names (Kinnet Ehring McSweeney), told O’Sullivan that not only didn’t Trump lose the election, but most of the people who stormed the Capitol weren’t even Trump supporters. “Just because people who were in the capitol were wearing Trump shirts and Trump hats doesn’t necessarily make them Trump supporters — anybody can get one of those shirts,” McSweeney said.

McSweeney also acknowledged that her friends think she’s a conspiracy theorist, and said: “I don’t know what’s so terrible about QAnon”.

.@RepMeijer fears baseless conspiracy theories like QAnon will destroy the GOP from within if Republicans don't decisively and unequivocally condemn the false and dangerous beliefs and take action to stop their spread.

Frequently described as a virtual cult, QAnon is a sprawling far-right conspiracy theory that promotes the absurd and false claim that Trump has been locked in a battle against a shadowy cabal of Satan-worshipping pedophiles made up of prominent Democratic politicians and liberal celebrities. Members of the violent pro-Trump mob that stormed the Capitol had ties to QAnon, and the conspiracy theory has made its way from online message boards into the political mainstream in recent years.

Watch O’Sullivan’s encounter with McSweeney, below.

Attendees at an event here in Trump National Doral this weekend are attempting to re-write the history of January 6th.

One asks, "what is so terrible about conspiracy theories anyway?"