[WATCH] Lauren Boebert Is So Dumb, She Doesn’t Understand That LGBTQ People Can Get Pregnant

More than a dozen Democratic members of Congress were among those arrested by Capitol Police on Tuesday afternoon as part of an abortion rights protest in front of the Supreme Court.

Within two minutes of their arrival, police began ordering the group, all of whom were wearing specially-made green bandanas reading “Won’t Back Down,” to “cease and desist.” Instead, the Democratic lawmakers marched from the Capitol to the Court, which has been fenced off since shortly after the leak of the draft decision overturning Roe v. Wade, and staged a sit-in on the street. 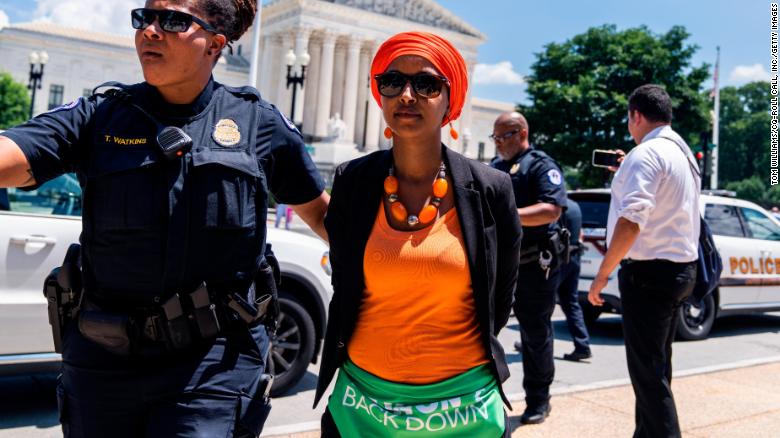 They were all taken away one by one by officers as they chanted, “The people, united, will never be divided.”

Today, Rep. AOC was arrested along with other members of Congress outside the Supreme Court for protesting in support of abortion rights. #AbortionRightsAreHumanRights pic.twitter.com/gvj9J1o5ic

The US Capitol Police tweeted: “Demonstrators are starting to block First Street, NE. It is against the law to block traffic, so officers are going to give our standard three warnings before they start making arrests.” Soon after, 35 people were arrested at the protest for “blocking traffic” including Democratic members of Congress:

The Supreme Court will not stop us. Even though they arrested us, we won’t stop our organizing, agitating, and legislating for justice.

Today I was arrested while participating in a civil disobedience action with my fellow Members of Congress outside the Supreme Court.

I will continue to do everything in my power to raise the alarm about the assault on our reproductive rights! ✊🏽pic.twitter.com/rpFYOGBDf4

The reaction from liberal Twitter carried a common theme: Democrats being arrested for peaceful protest while Republicans connected to the January 6th siege at the Capitol have yet to suffer any consequences.

It’s quite telling that more members of Congress were arrested today for protesting in support of abortion rights than have been arrested ever for facilitating Jan. 6th. https://t.co/LXLrTLMNk0

So they finally arrested members of Congress but it was Democrats for protesting instead of Republicans for treason?

Did I understand that correctly?

When Josh Hawley raises his fist, he walks free for seditious conspiracy.

Some users doubted the claims of being arrested, as videos showed them with their hands behind their backs without handcuffs. Capitol Police tweeted the verification shortly after the arrests.

So far, no charges against any members of Congress have been announced.