Vice President Kamala Harris is embracing calls for an international war crimes investigation of Russia over its invasion of Ukraine, citing the “atrocities” of bombing civilians, including a maternity hospital.

Speaking alongside Polish President Andrzej Duda at a press conference in Warsaw on Thursday, where she is demonstrating U.S. support for NATO’s eastern flank allies, Vice President Harris expressed outrage over Wednesday’s bombing of the maternity hospital and the heartbreaking scenes of bloodied pregnant women being evacuated, as well as other attacks on civilians. But Vice President Harris stopped just short of directly accusing Russia of having committed war crimes. 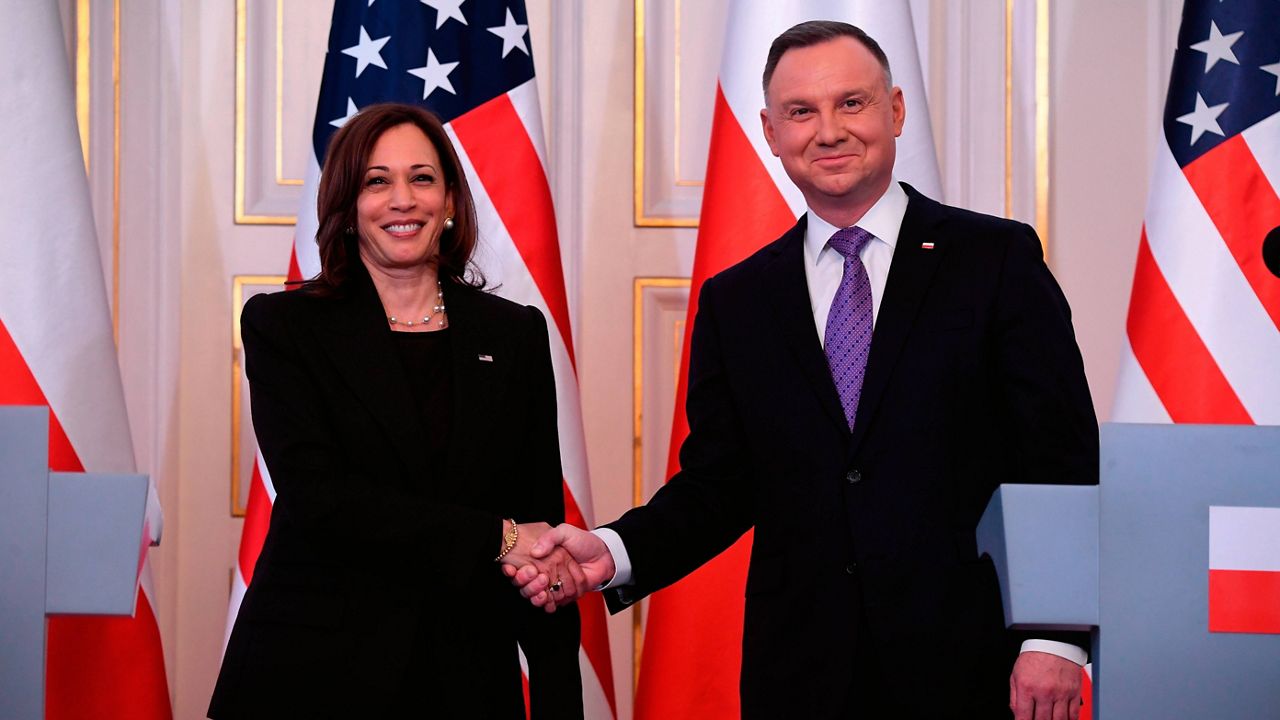 The Vice President’s visit to Poland came amid a kerfuffle between Warsaw and Washington over a Polish proposal to send its Soviet-made fighter jets to a U.S. and NATO base in Germany so they could then go to Ukraine. Poland, in turn, would receive American F-16s. “Absolutely there should be an investigation, and we should all be watching,” said Harris, noting that the United Nations has already started a process to review allegations. “I have no question the eyes of the world are on this war and what Russia has done in terms of this aggression and these atrocities.”

Today I met with Polish Prime Minister Mateusz Morawiecki and President Andrzej Duda to demonstrate we stand shoulder to shoulder with our NATO Ally, Poland, in response to Russia’s invasion of Ukraine. Together we will continue to support the people of Ukraine. pic.twitter.com/dMERmejWSt

Vice President Harris showed her support for an investigation of war crimes just after the Biden administration on Wednesday warned that Putin might seek to use chemical or biological weapons in Ukraine. The White House rejected Putin’s government’s claims of illegal chemical weapons development in the country it has invaded after Russian Foreign Ministry spokeswoman Maria Zakharova accused Ukraine of running chemical and biological weapons labs with U.S. support, but said so without providing evidence. Putin’s use of projection language, in this case, could have deadly results.

VP Harris held a roundtable discussion with people displaced from Ukraine at the American School of Warsaw. 🇺🇸🇺🇦 pic.twitter.com/gVPJFzHcXL

Poland had publicly floated the proposal without first consulting the U.S. Just as Harris arrived in Warsaw late Wednesday, the Pentagon definitively rejected the idea, saying it would run the risk of escalating the Russia-Ukraine war. At Thursday’s news conference, both Harris and Duda sought to brush aside differences on the fighter jets issue.

VP Harris says she supports a call for an international war crimes investigation of Russia over its invasion of Ukraine.

“I want to be very clear, the United States and Poland are united in what we have done and are prepared to do to help Ukraine and the people of Ukraine, full stop,” she said.