Over 150K Ukrainians Flee Kyiv As Russian Military Rolls In

American support for its ally Ukraine spilled out into the streets of several U.S. cities as Ukrainians living stateside decried the senseless invasion of their homeland. More than 1 million people in the U.S. report Ukrainian ancestry, according to the Census, with sizable populations in New York City, Chicago, Seattle, Sacramento, and Los Angeles.

Demonstrators gathered in Manhattan’s Times Square and near the Russian Federation’s mission to the United Nations on Thursday, waving blue-and-yellow Ukrainian flags and denouncing Russian President Vladimir Putin. About 100 people took to an overpass in Chicago, putting their hands to their hearts as the Ukrainian national anthem blared from a big speaker. Social media users displayed Ukraine’s blue and yellow colors on their profiles in solidarity. But the biggest response by far has been from Ukrainians and Russians seeking refuge in the United States. Ukrainians hope to flee Russian troops, while Russians worry they may get drafted and have bank accounts frozen in a wartime economy. 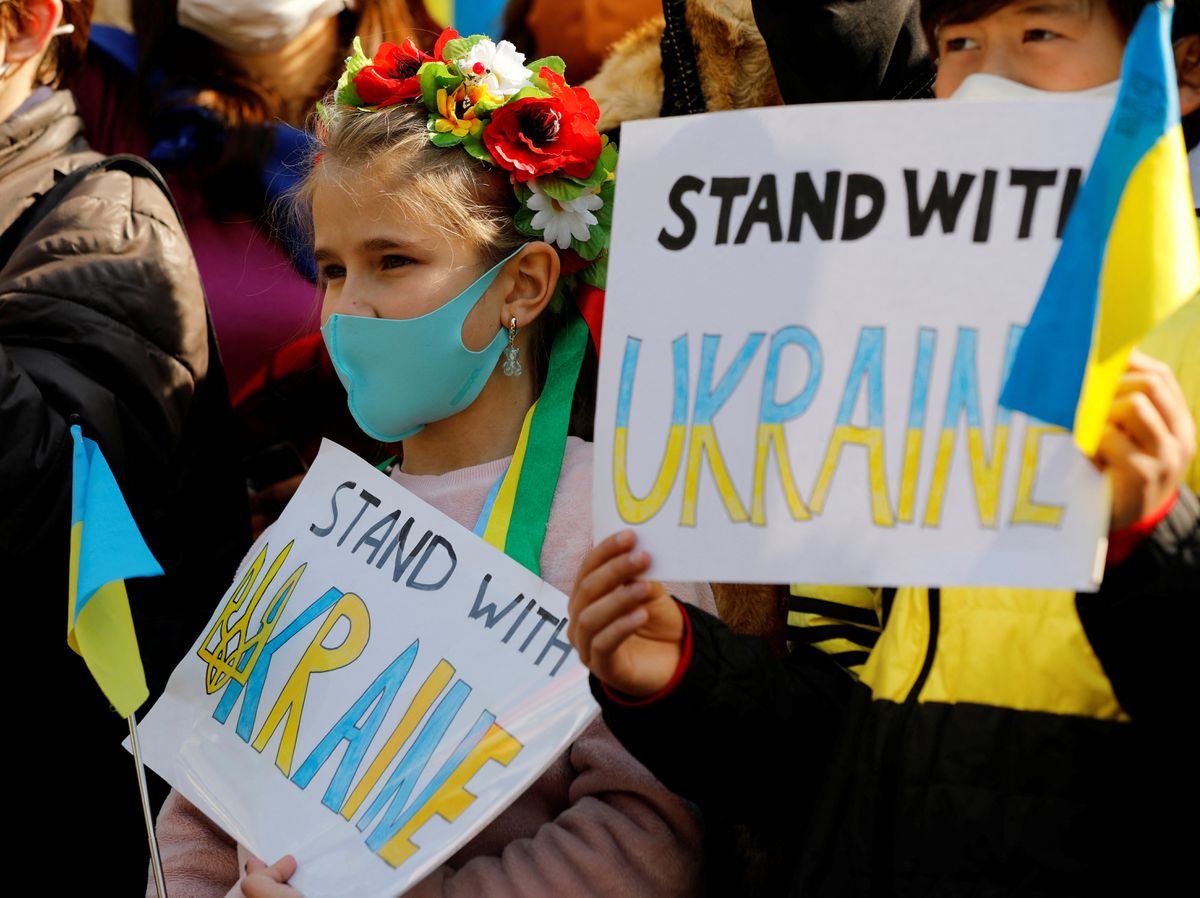 Ukrainians could potentially flee their country, fly to Mexico from Europe as tourists, and enter the U.S. by land to claim asylum, as a growing number of Russians have done over the last year, Mouratova said. Fleeing war, however, is not considered legal grounds for asylum. Ukrainians could also be eligible for refugee resettlement —up to 125,000 can be accepted in the U.S. this year after being approved abroad — but the processing has been slow as U.S. authorities have been focusing on Afghans seeking to flee Taliban rule.

Open the gates @POTUS, Virginia will welcome Ukrainian refugees to come here. We will always stand prepared to aid those in need from any part of the world.

White House press secretary Jen Psaki said the U.S. was prepared to accept Ukrainian refugees, “but we certainly expect that most if not the majority will want to go to Europe and neighboring countries.”

Immigration advocates urged the Biden administration to grant Temporary Protected Status (TPS) to Ukraine, a form of reprieve for its citizens already in the United States. The U.S. has granted TPS to 12 countries afflicted by war or natural disaster.

More than 150,000 Ukrainian refugees have now crossed into neighbouring countries, half of them to Poland, and many to Hungary, Moldova, Romania and beyond.

Displacement in Ukraine is also growing but the military situation makes it difficult to estimate numbers and provide aid.

Attorneys assisting members of the Ukrainian-American communities have been urging elected officials to more to support Ukraine, including securing a no-fly zone over the country and providing humanitarian protection for Ukrainians currently in the U.S. so they don’t have to return. They are also working on ways to support Ukraine financially, since apps like Venmo and PayPal aren’t readily available there.

I have a message from SEAN PENN, who is on the ground in Ukraine.

In Philadelphia, the United Ukrainian American Relief Committee, which was formed in World War II to help resettle Ukrainian refugees, pivoted to a wartime footing once again, readying a container packed with clothing, diapers, wheelchairs, medical supplies, and personal hygiene items. Donations had increased over the past several weeks as Russia massed its military on Ukraine’s doorstep, according to its executive director.

To the free people of the world!

We feel your support. We see your demonstrations with our flags. We hear your chants. This helps us fight the horrific Russian evil.