Ukraine and its Western allies reported mounting evidence of Russia withdrawing its forces from around Kyiv and building its troop strength in eastern Ukraine. But Ukrainian President Volodymyr Zelenskyy warned in his nightly video address hours earlier that departing Russian troops were creating a “catastrophic” situation for civilians by leaving mines around homes, abandoned equipment, and “even the bodies of those killed.” His claims could not be independently verified.

Ukrainian troops moved cautiously to retake territory north of the country’s capital on Saturday, using cables to pull the bodies of civilians off the streets in one town out of fear that Russian forces might have booby-trapped them before leaving, according to Associated Press reporters on the ground in Kyiv. 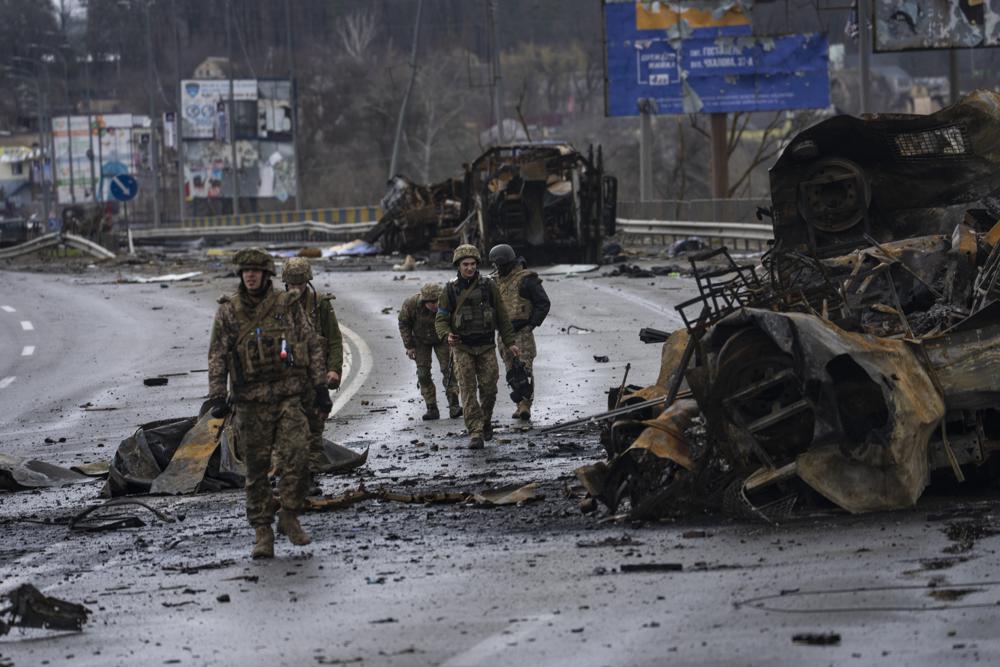 But after more than five weeks of the war, the estimated 4 million refugees who have fled Ukraine return still won’t be returning home any time soon. Zelenskyy said he expects departed towns to endure missile strikes and rocket strikes from afar and for the battle in the east to be intense.

Russia has been conducting targeted attacks on oil depots around the country, including in Lviv and Dnipro.

In towns and cities surrounding Kyiv, signs of fierce fighting were everywhere in the wake of the Russian redeployment. Destroyed armored vehicles from both armies are left in streets and fields along with scattered military gear.

The AP reports that the International Committee of the Red Cross planned to try Saturday to get into the besieged port city of Mariupol to evacuate residents after canceling the operation Friday when it did not receive assurances the route was safe. City authorities said the Russians blocked access to the city. There was no word as of late Saturday whether the Red Cross managed to reach Mariupol, which has been surrounded by Russian forces for more than a month and has suffered some of the war’s worst attacks.

Appalled by atrocities in Bucha and other towns in Ukraine. Reports of Russian forces targeting innocent civilians are abhorrent.

The UK is working with others to collect evidence and support @IntlCrimCourt war crimes investigation. Those responsible will be held to account.

Why Dogs Are a Politician’s Best Friend

In towns and cities surrounding Kyiv, signs of fierce fighting were everywhere in the wake of the Russian redeployment. Destroyed armored vehicles from both armies are left in streets and fields along with scattered military gear.

Talked to @BorisJohnson again. The United Kingdom is our powerful ally. Discussed the defensive support for 🇺🇦, intensification of anti-Russian sanctions and post-war security guarantees. We look forward to the donors' conference for Ukraine.

Read the full report from the Associated Press.