Newsmax Host: Fox News Has Turned On Trump and is Working With America’s Enemies

The Daily Wire’s Ben Shapiro, aka Twitter’s favorite punching bag not named Ted Cruz or Jim Jordan, decided to show his support for Home Depot by doing what looked like the least amount of shopping possible while also demonstrating he’s neither shopped at Home Depot before nor has he ever held a piece of wood in his delicate hands.

This isn’t the first time Shapiro’s taken an obtuse flex and been ridiculed for it (this week, even). A little backstory behind this latest self-own that has Twitter users reminding him of that time he tried it with Cardi B and Megan Thee Stallion when they released “WAP,” a song that celebrates female sexuality. Shapiro shared a quote from his “doctor wife” that had the internet feeling very sad for Mrs. Dr. Shapiro.

Georgia’s controversial new voting law has faced major pushback, and not just from activists, but from corporations based in the state seeking positive media exposure, such as Coca-Cola and Delta. Home Depot, on the other hand, has stayed silent and is facing calls for a boycott after choosing to stay out of the controversy. So of course Shapiro went right to Home Depot to show his support by dropping maybe a whole two dollars. Shapiro released an Instagram story encouraging his “fans” (who are you people?) to shop at Home Depot. But Shapiro can’t do anything without it turning into a self-own, as he emerged from Home Depot carrying nothing but a single plank of wood. In the world’s smallest plastic bag. 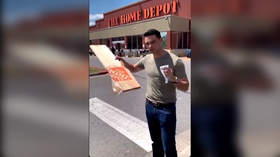 Twitter users had so much material to work with, they were still going well into Thursday evening. Takes ranged from “what is Ben Shapiro going to do with that one piece of wood” to references to his marriage. Herewith, a roundup of some of the best tweets about one of the worst people ever.

Ben Shapiro: “I would like a piece of wood.”

the funniest part to me is they bagged that piece of wood like "oh he's gonna need that" lmaooooooooooo https://t.co/tPyoC7T9PK

Ben Shapiro “I always buy my wood at Home Depot when I’m making sex toys for my wife Sahara.” pic.twitter.com/9zBQ1ChsPU

can you imagine how good it would feel to just deck him with that plank https://t.co/gYw7uPxYbK

WATCH: Ben Shapiro Says A SCOTUS “Worth Its Salt” Would Overturn Marriage Equality