The Trump Plaza Hotel in Atlantic City, New Jersey, had fallen into such disrepair that the city has scheduled it to be demolished on Wednesday morning. In what can only be described as the ultimate visual metaphor for everything Trump, the hotel will be imploded Wednesday morning at 9 am local time.

Nearby residents and visitors alike are enjoying the irony, to the point that the Caesars hotel across the street is offering special discounts for visitors who want to get the best view of the Trump hotel get blown up. 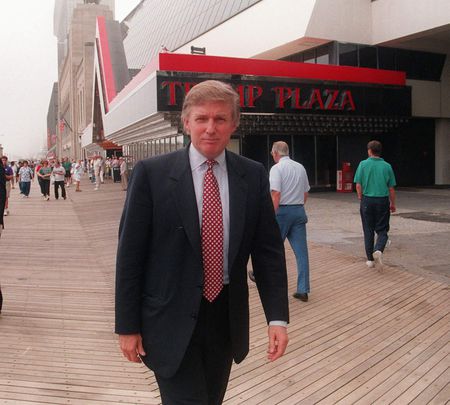 The hotel had opened to much fanfare in May of 1984 as Harrah’s at Trump Plaza and saw its revenue sharply decline in 1990 when Trump opened its sister property, the Taj Mahal. After years of losing money, Trump announced it would close in September 2014. Due to various disputes, its demolition was repeatedly postponed until this week.

With the flattening of the property and its marquee, the Trump name will now be permanently erased from the Boardwalk. But the mayor made a statement stressing the decision was about safety, and nothing else.

“This is not about Donald Trump. This is not about politics,” said Marty Small, who added that his focus is on the future of this piece of prime real estate, which is still privately owned by billionaire investor Carl Icahn, who hasn’t announced future plans for the site.

They’re blowing up Trump Plaza in Atlantic City tomorrow (Wednesday). When Donald Trump owned it, he once tried to use eminent domain to kick a widow out of her house. He wanted her property as a limo parking lot. Spoiler alert: He failed https://t.co/2mbtL7thX4

In what is destined to become an instant classic GIF to represent failure, the implosion of Trump Plaza can be seen through the city’s official website.

Sidney Powell Could Be Disbarred For Lying in Court For Trump

WATCH: “No One Can Run Out The Clock” 1/6 Committee Moves Forward With Next Criminal Referral