Back in October 2021, Sen. Kyrsten Sinema (D-AZ) gave her students in an advanced fundraising class at Arizona State University a break. She stepped out of the classroom to go move her car to another location near the downtown Phoenix campus and found a group of four activists waiting to talk to her. Sinema didn’t stop to listen to the activists, some of whom had shown up to her Phoenix office months earlier to ask to meet with her. Sinema ignored them and, instead of going to move her car as she had planned, made her way to a nearby public bathroom as the activists recorded everything on their phones.

Sinema told ASU police she intentionally went into the bathroom because she believed that recording someone inside a bathroom is a crime, according to a police report the Arizona Mirror obtained under the state’s public records law. The senator’s comments in it have not been reported on before now, according to the paper. “Sinema stated this was not her first time being approached in this way and that is why she entered the bathroom, knowing it was illegal for someone to record another person inside the bathroom,” Sgt. Katie Fuchtman wrote in the police report. 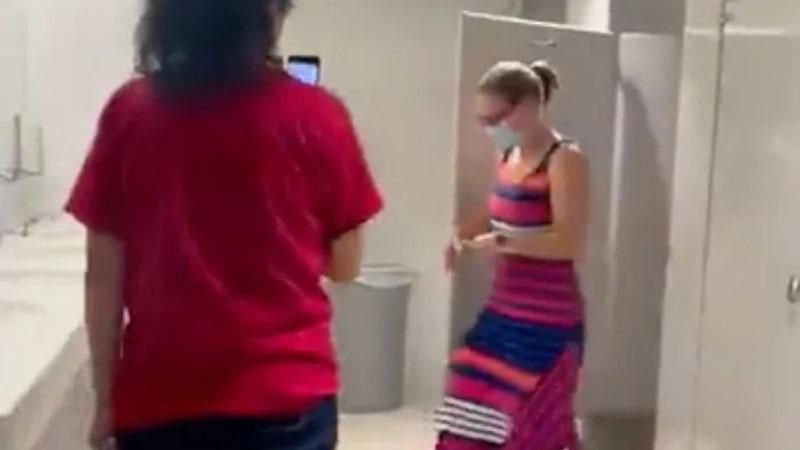 After the incident, Sinema told police officers that she believed the activists had committed a crime by breaking a state law that bars surreptitious filming — the law she said prompted her to seek refuge in the bathroom. That law applies in cases where the victim is filmed while “urinating, defecating, dressing, undressing, nude” or engaged in a sexual act, none of which applies in this specific case; although Sinema was in a stall during a portion of the video, she cannot be seen. But Sinema is still pushing for all four of the activists involved to be “held accountable,” which could come with dire consequences for one of them.

We’ll never know what Sinema’s motives are 🤔
She hides in the bathroom and flushes the toilet on people. Thought she was an independent woman… but apparently she works for Mitch McConnell now pic.twitter.com/4loHu6WlE1

In the video filmed at the entrance of the bathroom, one of the activists told Sinema her name is Blanca, although police couldn’t confirm her identity. Blanca is an organizer with Living United for Change Arizona (LUCHA), a community organization that has mobilized working class and majority-Latino neighborhoods to vote, and after the video went viral, some condemned the LUCHA organizers for recording the Democratic U.S. senator inside the bathroom. Others claimed Blanca should be deported, something Sinema is apparently aware could happen should she press charges.

Blanca has a temporary deferral from deportation under the Deferred Action for Childhood Arrivals (DACA) program. DACA recipients, also known as Dreamers, are the lowest level priority for immigration officials, but trouble with the law jeopardizes that. Police ignored Sinema’s suggested felony charges in favor of misdemeanors, but prosecutors have returned the case back to officers, asking for more information.

[COMMENTARY] Selfish Jerks Have Ruined Our Chances For Herd Immunity. What Do We Do Now?

🔴BREAKING: Blanca, an AZ immigrant youth confronts @SenatorSinema inside her classroom, where she teaches @ ASU. "in 2010 both my grandparents got deported bc of SB1070…my grandfather passed away 2 wks ago & I wasn't able to go to Mexico bc there is no pathway to citizenship." pic.twitter.com/JDZYY2fOD2

[This is a continuing story, please check back for updates]