Historic Supreme Court nominee Judge Ketanji Brown Jackson closed out the first day of her confirmation hearings on Monday by pledging to decide cases “without fear or favor” if the Senate confirms her historic nomination as the first Black woman on the high court.

Chairman Dick Durbin (D-IL) stressed the historic nature of Jackson’s nomination, as she will be the first Black woman to serve on the high court if confirmed by the Senate. “Today’s a proud day for America,” he declared. 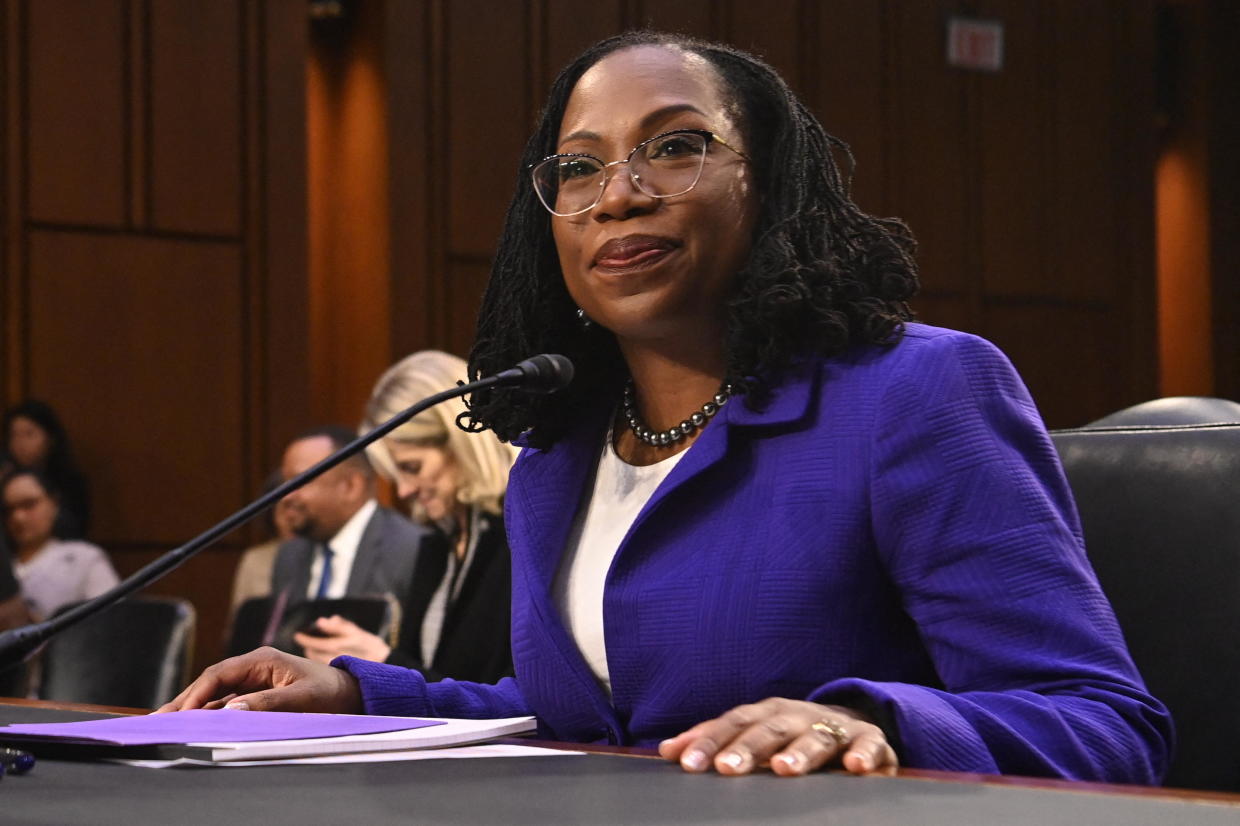 Senate Republicans had promised to ask Judge Jackson “tough” questions over the next days of hearings, with a special focus on her record on criminal matters. Democrats were full of praise for President Joe Biden’s Supreme Court nominee, while many Republicans used their speaking time to either grandstand on unrelated issues or criticize their Democratic colleagues for their handling of Justice Brett Kavanaugh’s confirmation hearing in 2018. But they still promised to be fair when hearing her judicial philosophy and views of the Supreme Court.

"Thank you for this historic chance to join the highest court, to work with brilliant colleagues, to inspire future generations and to ensure liberty and justice for all," Judge Ketanji Brown Jackson says, concluding her opening statement. https://t.co/2fzohhVjQF pic.twitter.com/QZBiNomz4W

Sen. Lindsey Graham (R-SC) noted that Democrats had opposed some past Republican judicial nominees who were Black or Hispanic, and he said that he and his GOP colleagues wouldn’t be deterred from asking probing questions by Jackson’s race. Graham said of some criticism from the left: “Bottom line here is, It’s about ‘We’re all racist if we ask hard questions.’ That’s not going to fly with us.”

Lindsey Graham says calling Republicans racist “is not going to fly with us” because they’re used to it pic.twitter.com/TwLKODUIVM

Sen. Josh Hawley (R-MO) remains oddly focused on Judge Jackson’s record regarding cases involving child pornography. Hawley said in his opening statement that his “research” showed that Jackson had a pattern of issuing lower sentences in child pornography cases, repeating comments he wrote in a Twitter thread last week where he also referenced QAnon conspiracy theories. The Republican National Committee echoed his claims, which Hawley did not raise when he questioned Jackson last year before voting against her appeals court confirmation. Sen. Ted Cruz (R-TX) also used his time to rant about Brett Kavanaugh’s confirmation hearings.

Thomas Griffith, a retired judge on the DC Circuit who was appointed by George W Bush of all people, is making a glowing statement and enthusiastically endorsing Judge Ketanji Brown Jackson

There's no reason for her confirmation not to be bipartisan

Judge Jackson spoke at the closing of the day, formally introducing herself to America as well as the body she had already taken several meetings with. Noting her nearly 10 years serving on the federal bench, Judge Jackson said she takes seriously her responsibility to be independent. “Members of this committee,” she said, “if I am confirmed, I commit to you that I will work productively to support and defend the Constitution and this grand experiment of American democracy that has endured over these past 246 years.”

Durbin opens Ketanji Brown Jackson's SCOTUS confirmation hearing: "Judge Jackson, we are all just temporary occupants of the Senate , the House…the highest court in the land. You Judge Jackson are one of Mr Lincoln's living witnesses of an America that is unafraid of challenge" pic.twitter.com/adOjyL0Hpb

“I decide cases from a neutral posture,” she told the committee. “I evaluate the facts, and I interpret and apply the law to the facts of the case before me, without fear or favor, consistent with my judicial oath.” Jackson also offered gratitude to President Biden for the “confidence” he placed in her and thanked the 45 senators she met with during the lead-up to her confirmation hearings. “Your careful attention to my nomination demonstrates your dedication to the crucial role that the Senate plays in this constitutional process. And I thank you,” Judge Jackson said.

Judge Ketanji Brown Jackson is a brilliant legal mind with the utmost character and integrity.

She deserves to be confirmed as the next Justice of the Supreme Court. pic.twitter.com/a15I2VkbLb

WATCH: Ted Cruz Thinks its Pathetic When Republican Candidates Suck Up to Trump

Carl Bernstein: Clarence Thomas Has Gone Rogue and Needs to Step Down [VIDEO]