‘Sliver of Hope’: Kremlin Sees A ‘Diplomatic Path’ to Resolution With Ukraine

The Rams may have won the Big Game on Sunday, but all anyone was talking about on Monday was the Halftime Show.

While conservatives were complaining about the tribute to Death Row Records that included mostly Black artists (save for Eminem, who stirred his own separate controversy by taking a knee during his performance, despite being specifically told not to do so by NBC), the President of the United States also added his take on the sport that celebrates the excellence of so many Black athletes, yet has almost no Black representation on their coaching staffs. 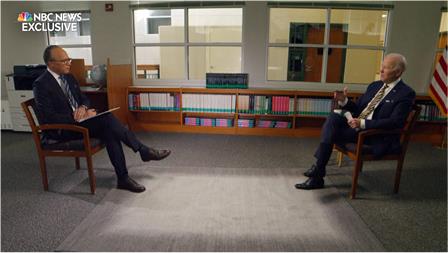 Diversity in the NFL’s coaching roles has long been criticized, particularly in a league made up of mostly minority players. Last year, about 71 percent of NFL players were people of color, and only a quarter was white, according to the Institute for Diversity and Ethics in Sport at the University of Central Florida (the races of the other 4 percent were unknown). Only three people of color have head coaching jobs in the league, in which white men hold the majority of the roles.

When asked by NBC's Lester Holt, Biden predicts the Rams will beat the Bengals. #SuperBowl pic.twitter.com/8gRgnqsxoM

Aside from telling NBC’s Lester Holt that the Rams “would be hard to beat,” the President also rightly called out the team owners who haven’t stepped it up when it comes to diversity in the front office or on the sidelines. “They haven’t lived up to what they committed to and lived up to being open about hiring more minorities to run teams,” President Biden said of team owners. “The whole idea that a league that is made up of so many athletes of color, as well as so diverse, that there’s not enough African American qualified coaches ‘to manage these NFL teams,’ it just seems to me that it’s a standard that they’d want to live up to,” he said. “It’s not a requirement of law, but it’s a requirement, I think, of just some generic decency.”

In his NBC exclusive Super Bowl interview, Biden says the NFL hasn’t “lived up to what they committed to” on issues of race.

In 2020, the NFL expanded its “Rooney Rule,” aimed at getting more people of color in the coaching ranks, to require clubs to interview at least two external minority candidates for head coach vacancies. Holt asked President Biden whether he thinks the NFL, because of its broad influence, should be held to a higher standard when it comes to diversity issues. “I think it should be held to a reasonable standard,” President Biden said. He had also made similar comments about racial equality in the league during last year’s Super Bowl interview with Westwood One Sports.

Congrats to the @RamsNFL on your Super Bowl victory — I look forward to having you at the White House. What do you say, @SecondGentleman?

Watch the full interview, below: