Notably, the poll shows a nail-biter tie race that is within the margin of error, between State Senator Troy Carter and State Senator Karen Carter Peterson, putting the two candidates in a strong position as the top two vote-getters. If these numbers hold for the final sprint of the primary, the duo of candidates will likely face off in a run-off election. 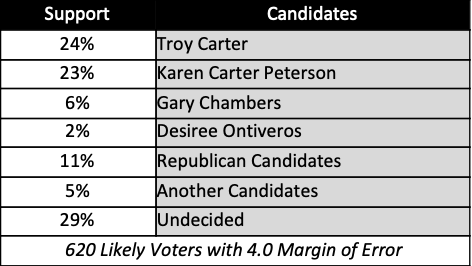 In addition to today’s announcement TRUST THE PEOPLE has been airing two radio ads across LA-02. The ad, “Won’t Be Troy Carter” aired first and is still running simultaneously with the PAC’s second spot, titled “Political Circumstances.”

Both radio ads are available here.

TRUST THE PEOPLE is a progressive Super PAC committed to holding candidate Troy Carter accountable in the Louisiana 2nd Congressional District Special Election to replace Representative Cedric Richmond. TRUST THE PEOPLE will shine a light on Carter’s history, particularly his longtime failure to challenge Louisiana’s mass incarceration crisis, press for police accountability for our communities, and stand up to the biases and abuses in our criminal justice system.