Local school board races are NOT what this publication normally covers, but with the rise in the number of far-right or extremist candidates showing up on ballots across this country, one obscure candidate in a hotly contested Nevada race stands out as yet another far-right extremist using social media in all the wrong ways. Katie Williams is running for School Board Trustee in Clark County, Nevada District B. She is running on a partisan platform. Unfortunately, this is a non-partisan race. Her social media posts all speak for themselves. The Ms. America Pageant wanted to speak about Katie’s “character,” and we thought it was the time that they told their side of the story. Katie Williams has had a plan all along, and here is the proof, offered by a very respected entity. So respected, that Katie did everything she could to pursue that title. This article will speak to her character. I do not have to. I have already publicly declared my support for her opponent, Jeff Proffitt. I have also donated money to his campaign.

Here is the article verbatim from MsAmericapageant.com

Katie Williams was stripped of her Ms. Nevada title and then launched her political career based on a lie. Here in its entirety is the response from the Ms. America Pagaent about Katie Williams. What is important to note here is that that once again, Ms. Williams is attempting to gain a position based on her politics and blind ambition on a non-partisan platform.

Pageant CEO and Founder, Susan Jeske was recently so angered by Ms. Williams and her misrepresentation of the facts that she posted the following article about Katie Williams which we re-published here (unedited). 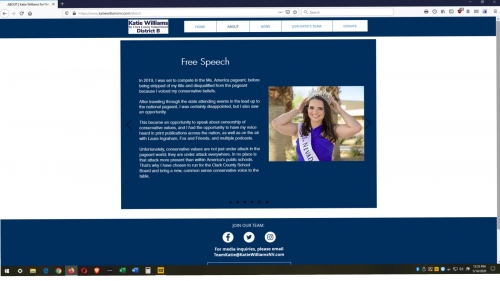 Katie Williams is running for School Board Trustee B in Nevada.

Katie Williams is running for office based on a FALSE claim that her FREE SPEECH was taken away from the Ms. America Pageant because of her conservative views and that she was a President Trump supporter. This is FALSE!

She states on her website that she was “stripped of her title because she voiced her conservative beliefs.” THIS IS FALSE! Katie Williams was ineligible to compete in the pageant because she was not following the rules of the pageant. 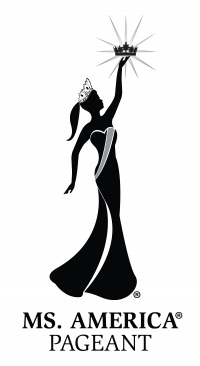 Scroll below to see proof that she was intermingling the Facebook Pages. ScreenShots were taken the date before the pageant said she was no longer eligible to compete in the pageant.

She was repeatedly intermingling the two Facebook pages and after many attempts to speak to her on the phone or try to remedy the situation the pageant had no choice but to disqualify her. After disqualifying her Katie sent an email stating that she does not agree and so the pageant made ANOTHER attempt to try and fix the problem with her. All she had to do was call the pageant within 12 hours and talk to me over the phone so we could easily rectify the problem.

Katie Williams never responded and then had her PR Person Spokesperson Noah Jennings start a false campaign thru Conservative Media outlets that she was kicked out of the pageant because she voted for President Trump and was a conservative.

* You can scroll below to read the Cease and Desist Letter sent to Katie.
* It also shows her Facebook Pages taken the day BEFORE she was ineligible to compete in the pageant.
* There are other Documents to support these facts of Katie Williams’ lies.

TO SET THE RECORD STRAIGHT

Due to the ongoing conduct of Ms. Katie Jo Williams who is continuing to maliciously and falsely accuse the Ms. America Pageant of disqualifying her based upon her political views, the pageant has issued a Cease and Desist letter. Ms. Williams response the following day on social media continued making falsehoods and misrepresentation of the facts and even posted up on public forums incomplete portions of the twelve-page Cease and Desist legal document.

The pageant is a “no politics pageant”. The pageant requires, in its written contract, that each of its contestants agrees to, and hand-signs, that they will not post or communicate political speech on any website or social media associated with the pageant.

There were 40 participants in this year’s Ms. America Pageant, and 39 of them had no difficulty following this simple directive.

Below is the full text of the Cease and Desist letter sent to Katie Williams from the pageants law firm Theodora Oringher.

IN RESPONSE TO KATIE WILLIAMS ACCUSATIONS

Katie Williams is distorting the facts.
See below for screenshots of her 3 Facebook Pages and violations.
Screenshots taken the day before and the day she was notified that she was no longer eligible to compete in the pageant. She then changed the content on her Facebook Pages drastically BEFORE she started her media campaign.

ALL the pageant asked of Ms. Williams, in writing, is to keep separate social media accounts. (ie: Facebook) One is for politics where she can voice her own opinion as Katie Williams and the other is a new Facebook page for the pageant representing Ms. Nevada State 2019.

The Ms. America Pageant is a No Politics pageant. It is in our Rules & Regulations as posted on the pageant website and therefore available to read before applying to the pageant.

It is also included in our contracts and requires handwritten initials and signatures acknowledging that you have read and understood the pageant’s rules.

(See her handwritten signature below)

The purpose for these Rules and Regulations is that the Ms. America Pageant does not want to be seen as endorsing any political candidate or political cause.

Thru many emails starting in July, she claimed she could not comprehend keeping pageant and politics separate on her Facebook pages. The pageant made many attempts to speak to her over the phone to try to resolve this issue. Many times we wrote to her to try to set up an appointment to have a telephone conference, all of which she consistently refused to do. The pageant believes that a telephone conversation is a reasonable request and was willing to speak to her at any time that was convenient for her schedule.

The pageant gave her a final deadline to edit the Facebook pages which she refused to do. (SEE SCREENSHOTS OF THE FACEBOOK PAGES BELOW)  This leads the pageant to believe that she is no longer capable of representing this pageant as Ms. Nevada State 2019, and she is no longer eligible to participate in the 2019 national pageant. Her title has been revoked.

The pageant offered her a full refund on her entry fee and refund on one ticket that she purchased to the pageant after she fulfilled the requirements of returning the crown and sash and removal of the title Ms. Nevada State 2019 from all social media and the Internet.

(See below-disqualifying Email and offering her a full refund) 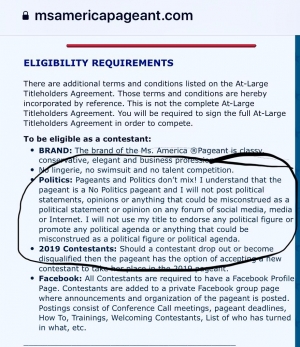 KATIE WILLIAMS – Pageant Violations
PAGEANT Facebook Profile Page
Over 1,100 Likes
Screen Shot taken on 8-17-19 the day before she was informed that she was ineligible to compete in the Ms. America Pageant as Ms. Nevada State 2019. The screenshot shows violations of her insistence to keep politics on her PAGEANT Facebook Fan Page. instead of expressing her political views on her personal Facebook Page which is ALLOWED by the Agreement. 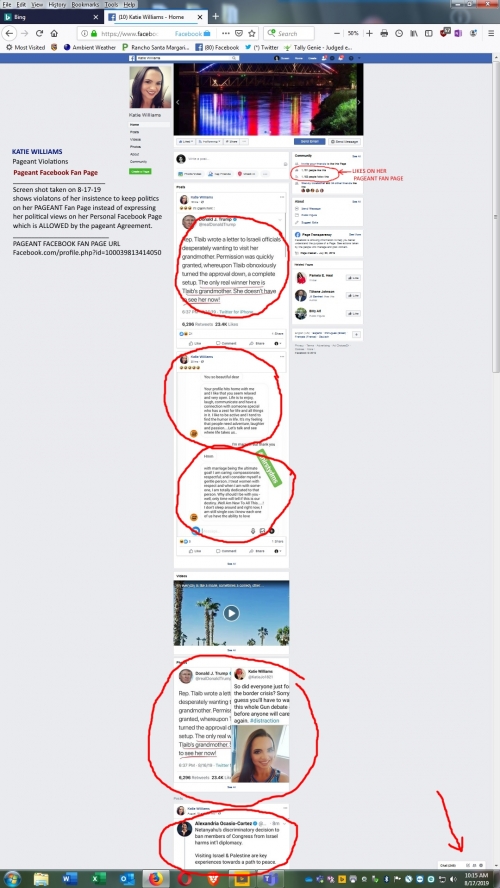 KATIE WILLIAMS – Pageant Violations
POLITICAL Facebook Profile Page
Sequential Screen Shots were taken on 8-18-19 the day she was informed that she was ineligible to compete in the Ms. America Pageant as Ms. Nevada State 2019. Screenshot shows violations of her insistence to keep PAGEANT RELATED MATERIAL and images on her Political Facebook Profile Page where she was free to express her political views no matter what they are. 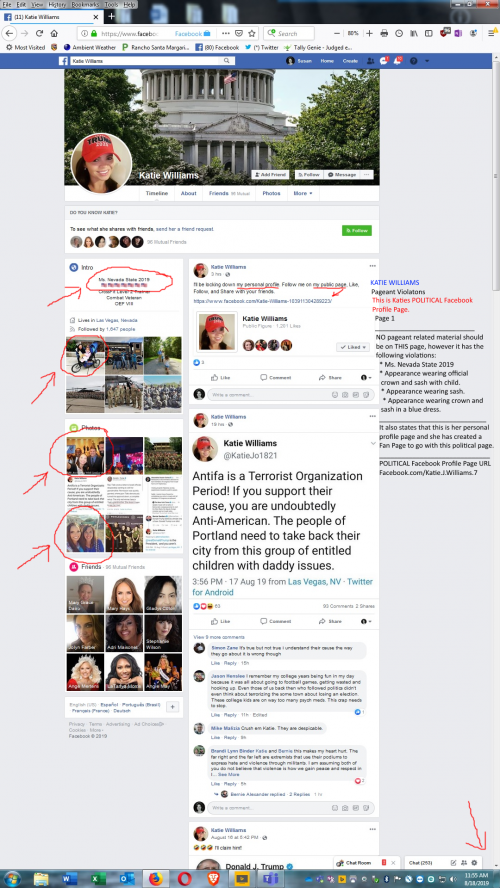 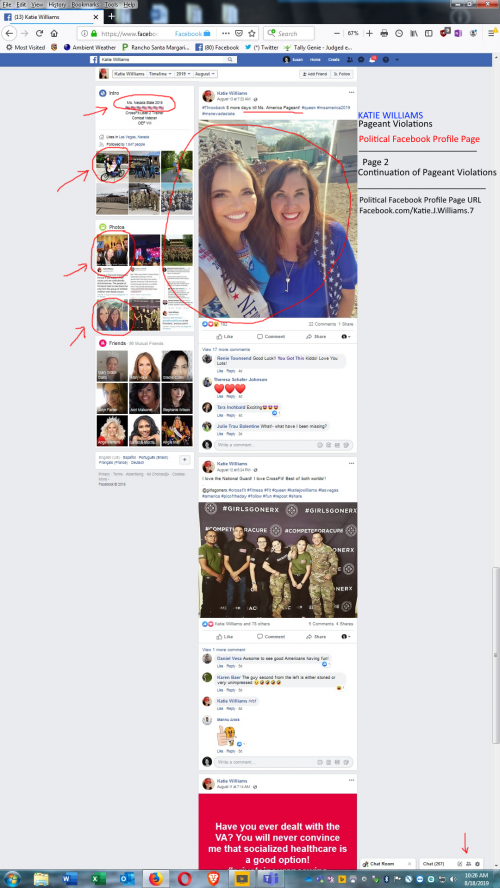 KATIE WILLIAMS – Pageant Violations
POLITICAL Facebook Fan Page
Over 1,200 Likes
Sequential Screen Shots taken on 8-18-19 the day she was informed that she was ineligible to compete in the Ms. America Pageant as Ms. Nevada State 2019.
Screen Shot shows violations of her continuing to keep PAGEANT RELATED MATERIALS and images on this POLITICAL Facebook Fan Page. This Political Fan Page was to be used to express her political opinion no matter what they are. 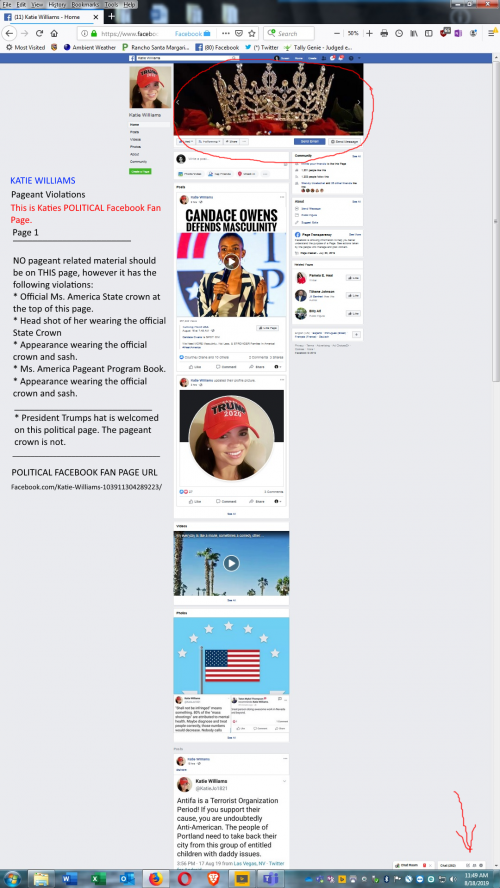 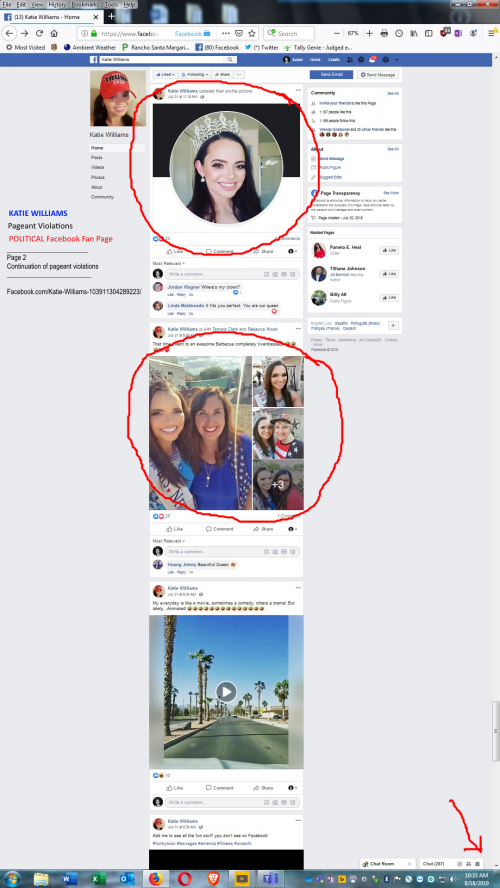 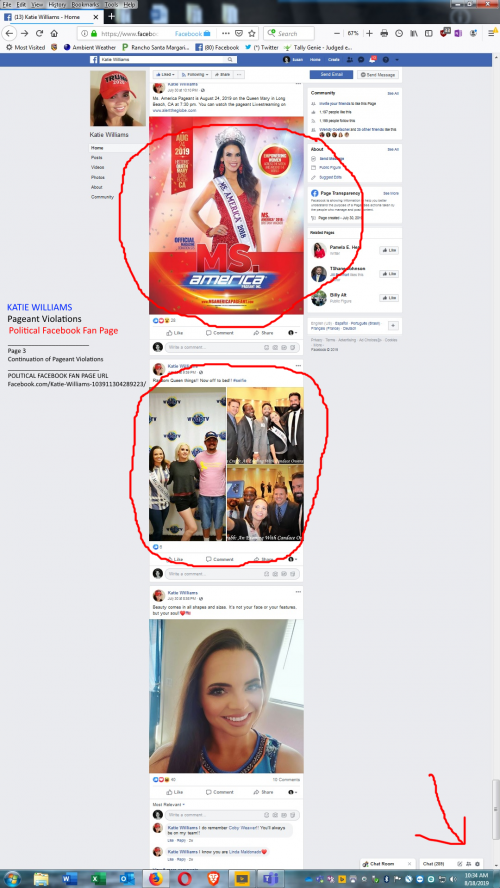 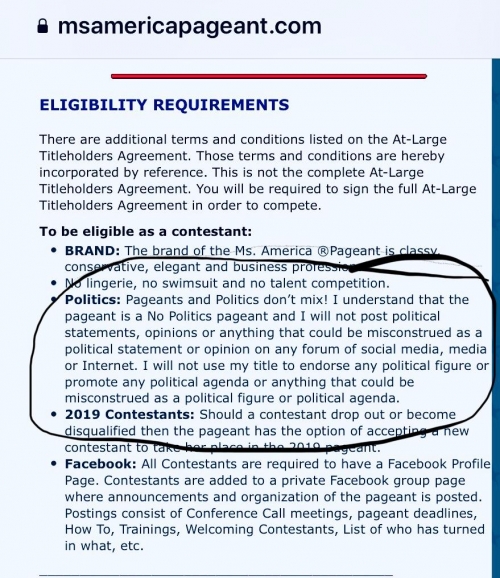 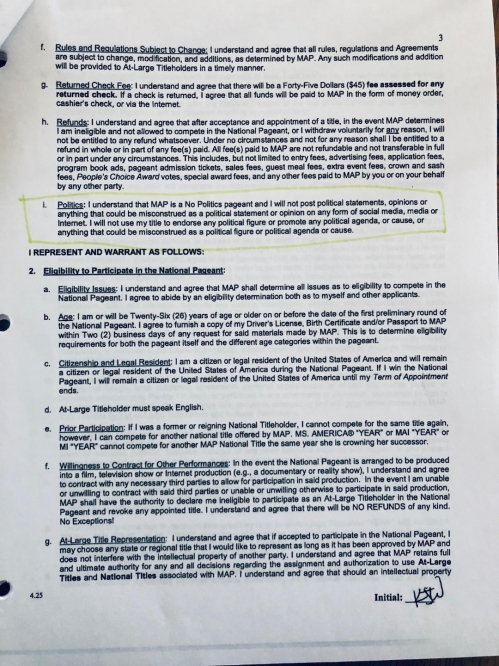 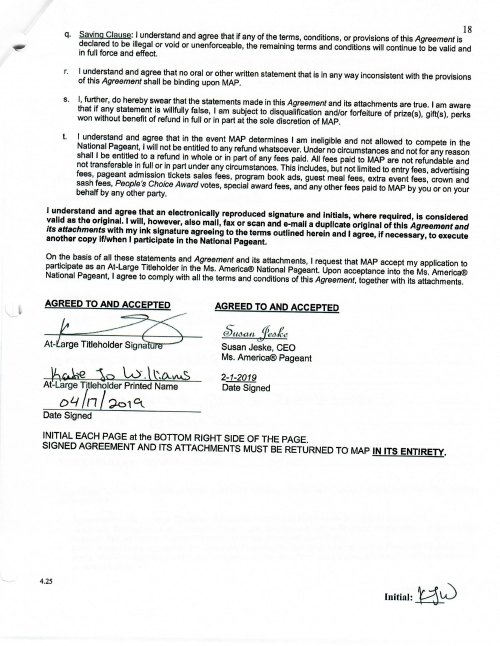 REVOCATION OF TITLE LETTER
Offering her a full refund on her money.
8-18-19 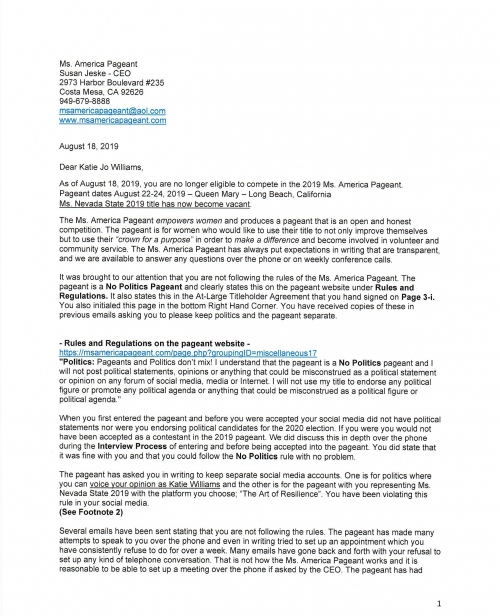 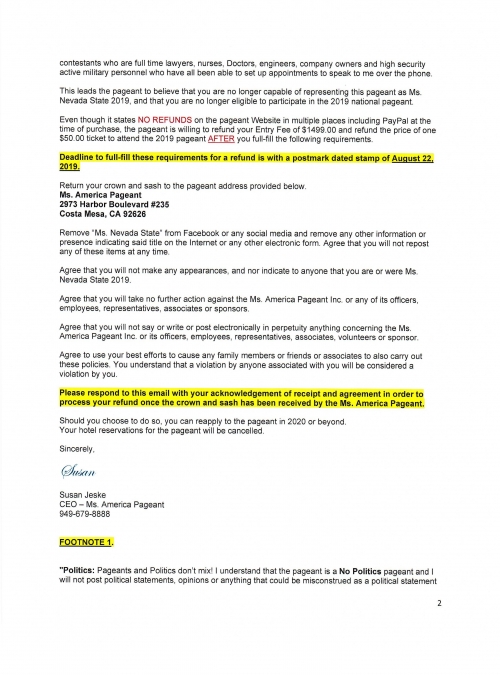 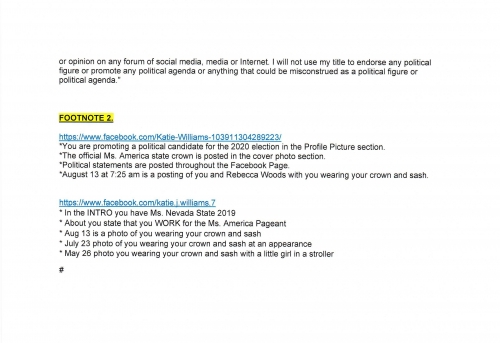 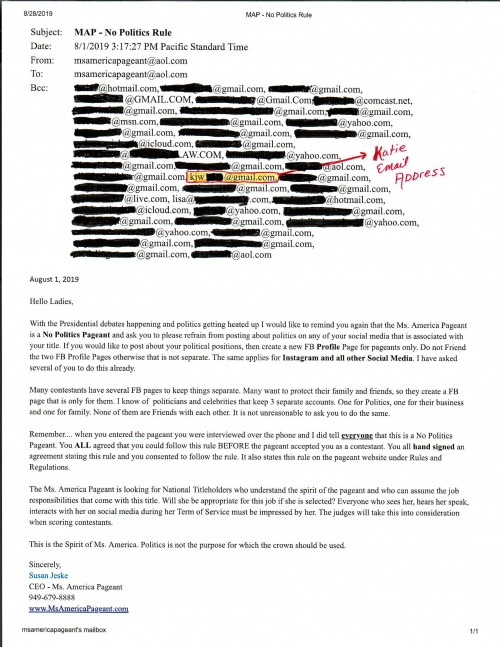 How Students Can Keep Up With Current Events