Democratic Sen. Joe Manchin appeared on CNN on Sunday and announced his endorsement for Republican colleague Lisa Murkowski for reelection, crossing party lines to back the incumbent from Alaska who faces a primary challenger supported by Donald Trump. Manchin has so often aligned with the GOP, the CNN chyron briefly misidentified him as a member of the party.

The conservative West Virginia lawmaker said he has teamed well with Murkowski in the 50-50 Senate to build bipartisan support for legislation such as President Joe Biden’s infrastructure law. He said Alaska and the Senate are well-served with her in office. 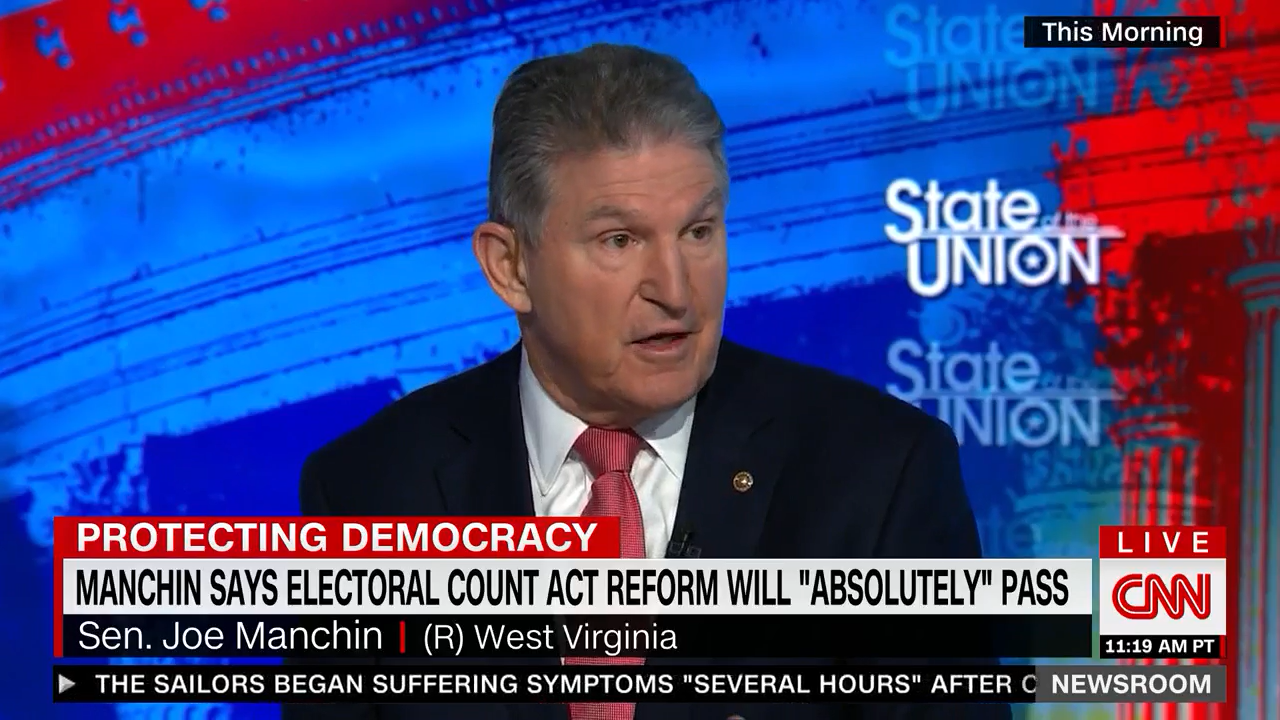 Murkowski faces GOP primary challenger Kelly Tshibaka, who has support from Trump and Alaska Republican party leaders but who significantly trails the incumbent in fundraising. Without a Democrat to back in the race–the state’s last Democratic senator, Mark Begich, lost reelection in 2014–Manchin made a somewhat shrewd political move by voicing his support for the incumbent Murkowski, who is one of the seven Republican senators who voted to convict Trump in his second impeachment trial for his role in stoking the January 6th Capitol insurrection.

"I'm endorsing my dear friend Lisa Murkowski. Alaska could only be so lucky to have her continue to serve them," says Democratic Sen. Joe Manchin on GOP Sen. Lisa Murkowski's bid for reelection. #CNNSOTU pic.twitter.com/k9dI6XNwci

“It’s hypocritical to basically work with a person day in and day out and then, when they’re in cycle, you’re supposed to be against them because they have an R or D by their name,” said Manchin, who appeared with Murkowski on CNN’s “State of the Union” to promote the values of bipartisanship.

Lisa Murkowski returns the favor, tells Joe Manchin that she'll endorse him in his next race. pic.twitter.com/BUuq1S3oWB

A member of the Senate since 2002, Murkowski lost the Republican primary for her seat in 2010 but ultimately won after launching a successful write-in campaign. She’s joined Democrats several times on high-profile votes, including opposing Trump’s effort to repeal President Barack Obama’s health law in 2017 and her 2018 refusal to vote to confirm Brett Kavanaugh as a Supreme Court justice.

Don Jr: YouTube Blocked my Dad’s Interview Because the Comments Were Awesome

I Find It Mature

Sens. Lisa Murkowski and Joe Manchin both endorsed the other.

"It's hypocritical to basically work with a person day-in and day-out, and then when they're in-cycle, you're supposed to be against them because they have an 'R' or 'D' by their name," Manchin said. pic.twitter.com/bF6BVq2lKg

Murkowski said Sunday she as well would support Manchin, who is up for reelection in 2024. Watch their full segment, below.

Why Would I Want to Know Their Location? Bill Gates Hits Back at COVID Conspiracy Theorists [VIDEO]