Some Experts Seeing Signs of Hope As COVID Cases Fall

The FBI has arrested a man with ties to the Koch Brothers in connection with the January 6th attack at the U.S. Capitol.

Brandon Prenzlin, who until this week was a grassroots coordinator at FreedomWorks, was arrested in Arlington, Virginia, on Sept. 17, according to an arrest warrant unsealed on Thursday. He faces four misdemeanor charges in connection with January 6th: knowingly entering or remaining in any restricted building or grounds without lawful authority; disorderly and disruptive conduct in a restricted building or grounds; disorderly conduct on Capitol grounds; and parading, demonstrating, or picketing in a Capitol building.

The FBI affidavit lays out Prenzlin’s alleged activities inside the Capitol on January 6th, and shows how they were able to build a case against Prenzlin by citing his presence on social media. Prenzlin has posed for photos with former Vice President Mike Pence as well as Rep. Jim Jordan (R-Ohio), who has spoken at “Stop the Steal” events and was photographed with another Jan. 6 defendant facing more serious charges.

We just wrapped up a GREAT weekend in Tampa at @TPUSA's #SAS2021!

We absolutely loved meeting with the young activists! It's great to see that our movement is STRONG with the youth of America! #ampFW 🇺🇸 pic.twitter.com/cDgMON0dHM

The FBI affidavit doesn’t explicitly say it, but it suggests that online sleuths known as the “Sedition Hunters” played a role in the case against Prenzlin. The sprawling community of open-source investigators, often working under the #SeditionHunters hashtag, has been working to identify the hundreds of Trump supporters who stormed the Capitol on Jan. 6. The Sedition Hunters website, where a photo of Prenzlin was labeled as No. 640 on a list of “Sedition Insiders,” noted before Prenzlin’s arrest that he had been identified.

It’s unclear precisely when the identification was made, but an image of Prenzlin included in a tweet from the @SeditionHunters Twitter account indicated that Prenzlin had been IDed by early July. That’s about the same time, according to the affidavit, that the FBI investigation got underway thanks to a tip. The FBI affidavit states that a federal law enforcement officer “conducted physical surveillance” at Washington National Airport on July 20 and confirmed that the man they watched on the plane looked “exactly like” a man who’d been at the Capitol. In an image of Prenzlin at the airport, he’s wearing a FreedomWorks polo. 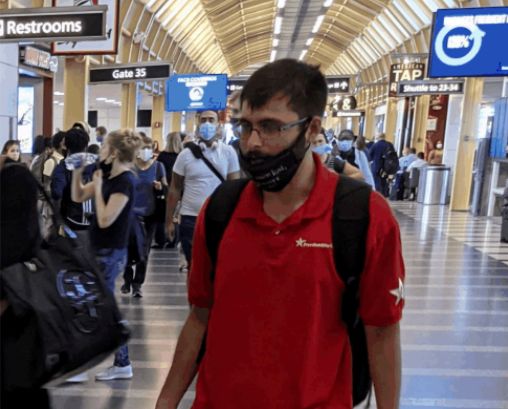 FreedomWorks is currently running an “Election Protection Initiative” featuring the conservative attorney Cleta Mitchell. As The New York Times reported in January, Mitchell had been “quietly helping President Trump’s attempt to subvert the election results” and was included on a now-infamous phone call where Trump pressured Georgia election officials, suggesting they could be charged if they didn’t “find” enough votes to overturn Joe Biden’s win in the state.