Among all of the disturbing and violent scenes the world witnessed live on January 6, 2021, as Trump supporters breached security barriers and marauded through the halls of the Capitol, was the sight of rioters carrying Confederate flags. The very symbol of American racism being paraded cheerfully into the literal seat of American democracy shook millions to their core, and photos of the men waving and smiling while defiling our voting process became a lasting and enduring image of just how far the right has fallen.

But now there is at least some closure for those angered by one of them. David Blair, the Maryland man who now faces a maximum prison sentence of five years after pleading guilty to a felony charge of obstructing law enforcement during a civil disorder. Blair was charged with assaulting a Metropolitan Police Department officer outside the Capitol during the January 6th attack while wearing a skull-themed face mask. Blair profanely taunted the officer and struck him with the wooden lacrosse stick he was using as a makeshift flagpole. An officer’s body camera captured a video of Blair waving the flag in front of a crowd that police were trying to disperse.

Police initially arrested Blair on the day of the riot and took him to a hospital to be treated for a cut on his head. The FBI then arrested Blair in February 2021. A federal grand jury indicted him on charges including assaulting, resisting, or impeding police with a dangerous weapon, a flagpole. Blair’s attorney disputed that the flagpole in question — a lacrosse stick — was a deadly or dangerous weapon.

Today, the man who carried a confederate flag into the US Capitol during the January 6th insurrection appeared in DC federal court. @MacFarlaneNews reports. pic.twitter.com/yIdebVNlsW

Estimated sentencing guidelines in Blair’s case recommend a term of imprisonment ranging from eight to 14 months. But Blair isn’t the only one who carried the Confederate flag during the January 6th riot.

David Alan Blair will be pleading guilty to count 2 of the indictment against him: interfering with a police officer during civil disorder. It's a felony with a maximum sentence of 5 years in prison. pic.twitter.com/LJW7VdmdpM

Kevin Seefried, of Delaware, was nabbed along with his son Hunter roughly a week after they both joined the hordes of right-wing extremists to storm into the Capitol in a violent effort to halt the certification of President-Elect Joe Biden’s win. Both were slapped with two felony charges, including violent entry and disorderly conduct on U.S. Capitol grounds, according to the criminal complaint filed by federal authorities. Hunter Seefried’s co-worker reported the men to the FBI, “relaying that Hunter Seefried had bragged about being in the U.S. Capitol with his father,” the complaint says. The co-worker also confirmed photos of Hunter Seefried posted by the Metropolitan Police Department. 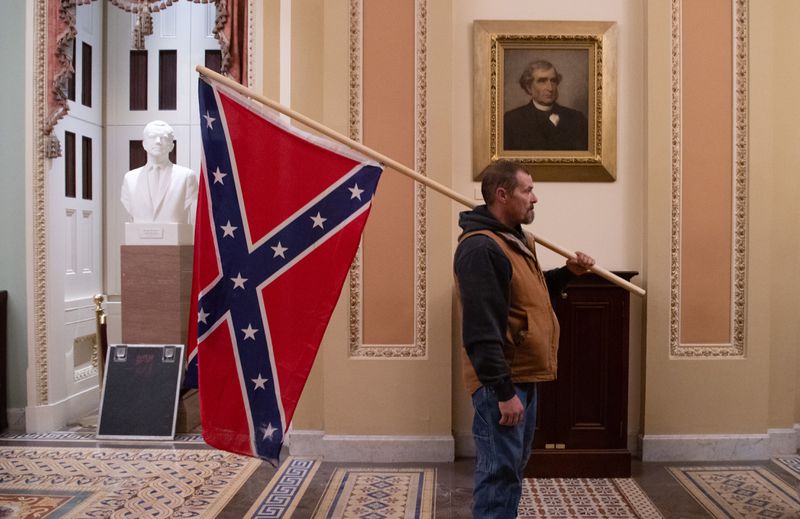