Reed Knox Christensen of Hillsboro, Oregon, was arrested in April 2021 on federal assault charges stemming from the failed insurrection at the U.S. Capitol on January 6th. Now Christensen has thrown his red MAGA hat into the ring as a Republican candidate for Governor.

Christensen filed the paperwork to run for Governor January 7th, one year and one day after federal prosecutors say he struck a Capitol Police officer with his fists as rioters attempted to overturn the presidential election. 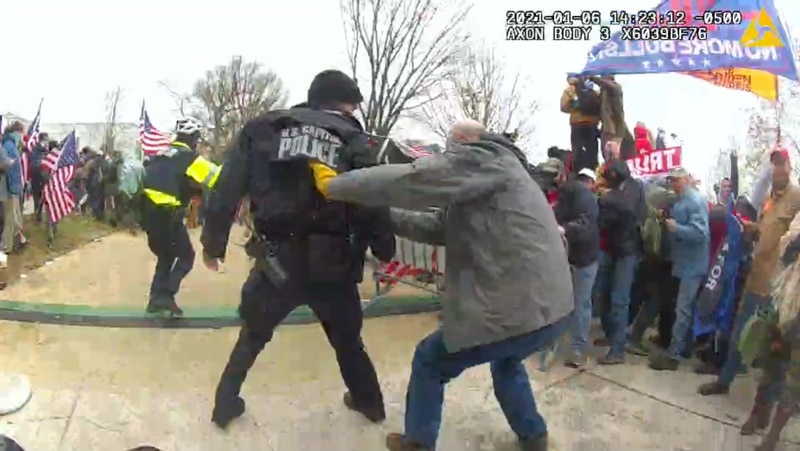 Christensen, a retired Intel electrical engineer living in Hillsboro, faced charges that he forcibly assaulted, resisted, impeded, or interfered with law enforcement, and willfully and knowingly engaged in an act of physical violence on the grounds of the Capitol Building on Jan. 6, 2021. In a recent interview with Portland’s Willamette Week, Christensen boasted about his “appropriate” actions during the violent siege, telling writer Aaron Mesh, “I think January 6th was an appropriate reaction by the American people.” Mesh writes that Christensen showed no remorse for the injured: “I think it was the first time since maybe even the Civil War when Republicans didn’t just wave signs at a rally, but really had a protest. That’s what I did,” he continued. “I did a protest. I tried to cross the line of control to wave a flag from the Capitol steps. When I came back from the January 6th rally, I felt like I had participated in the Boston Tea Party 2.0. If anything, I have more of a right to run as governor because I stood up for the Constitution.”

Reed Christensen is now running for governor of Oregon, because of course he is #TrumpCult #NeverForgetJanuary6th https://t.co/MiVY7Z26wm

Not only isn’t Christensen remorseful, but he’s also made his actions on January 6th a central part of his campaign, Mesh writes, contending that he is “standing up to a tyrannical government”. He told Mesh on Saturday that COVID-19 pandemic stay-home and mask orders were “government overreach that logically resulted from vote-by-mail elections” that he believes were fraudulent. “Will the leftists that control this state at least hold a one-day, open election and convince me that the majority of people want this?” he asked. “Why would I lose my rights as an American as the result of a closed election where I have to believe that not one county cheated? Why don’t you convince me with an open and honest election?”

The 2020 Presidential election was ruled to have been won fairly by President Joe Biden, with no evidence of any significant voter fraud produced by any of the lawsuits brought by Trump’s legal team. The January 6th Committee is also investigating the fake electors who attempted to overturn their states’ votes for Joe Biden by forging fraudulent election documents.

Oregon’s Reed Knox Christensen, aka #grandpayellowhands, “does not use social media,” his lawyer says at a hearing. He entered standard not guilty pleas at his post-indictment arraignment. His next hearing is set for early October. pic.twitter.com/Fh70i6tIDw

Christensen says that he and his wife will spend the next 10 months traveling Oregon in an RV to talk with voters. The next hearing in his federal assault case is March 23rd.

Reed Knox Christensen, age 62, of Hillsboro made his initial appearance before a federal magistrate in Portland this afternoon on charges related to his alleged role in an assault on a federal officer at the U.S. Capitol on January 6th. More: https://t.co/5fYb57CSkf pic.twitter.com/IbrytcqE3x