Rep. Marjorie Taylor Greene (R-GA) headlined a white nationalist conference that took place during CPAC where attendees cheered Russia’s invasion of Ukraine and chanted the name of President Vladimir Putin shortly before she was introduced.

Greene was introduced by Nick Fuentes, whom she had disavowed knowing to a CBS News camera crew moments before he brought her on stage to speak at the America First Political Action Conference (AFPAC) in Orlando. Fuentes, who advocates for preserving the nation’s “white demographic core,” introduced Greene by praising “young white men” as the “secret sauce” of the GOP, and also encouraged a round of applause for Russia. 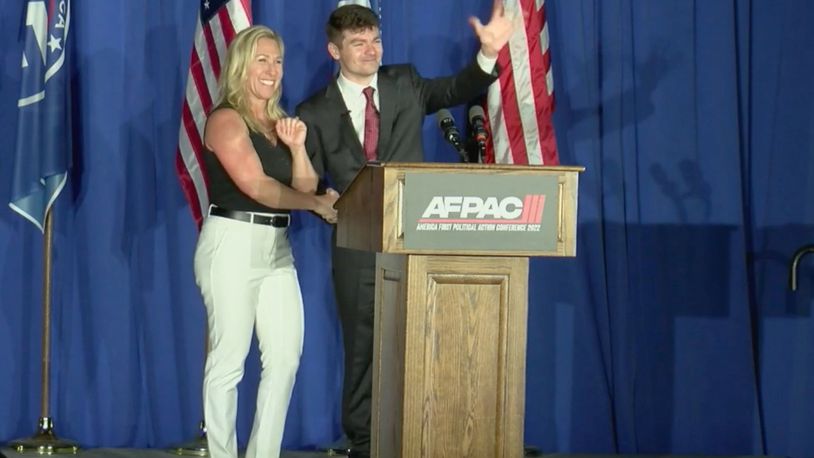 Her appearance on Friday triggered new calls for the GOP to rebuke Greene, who has largely escaped reprimand from her own party for a history of racist, xenophobic, and antisemitic comments. Greene’s remarks largely echoed her statements at other public events, where she’s lashed out against “cancel culture” and tried to frame Democrats and mainstream Republicans as enemies of the state.

Really weird how @RepMTG was telling everyone “I don’t know her” about Nick Fuentes at #CPAC right before getting on stage with Nick Fuentes https://t.co/d9lIzK6ayd

Greene’s speech contained transphobic, homophobic, and racist comments as she played to her audience of white nationalists.

Being truly America First means rejecting the Democrat obsession with skin color, sexuality, and gender. It means having the courage to stop agonizing over fake divisions and disingenuous allegations from our godless and gutless mainstream media.

Greene’s long history of hateful statements includes her past support for the dangerous pro-Trump QAnon conspiracy theory, her promotion of lies about school mass shootings, and her endorsement of social media posts that called for the execution of lawmakers. Twitter recently banned her personal account after she repeatedly spread lies about the coronavirus.

On Saturday, the Republican Jewish Coalition released a statement that it “condemns in the strongest possible terms” Greene’s appearance at the AFPAC event. Rep. Liz Cheney (R-WY), the Vice Chair of the January 6th House Select Committee, called the gathering that Greene headlined a “white supremacist, antisemitic, pro-Putin event.” The “silence by Republican Party leaders is deafening and enabling,” Rep. Cheney added. “All Americans should renounce this garbage and reject the Putin wing of the GOP now.”

Greene challenged her critics on Twitter to find fault with her speech, but she never entered into a debate with anyone who responded.

I am not going to play the guilt by association game in which you demand every conservative should justify anything ever said by anyone they’ve ever shared a room with.

I’m not going to be drawn into that. I’m only responsible for what I say.

So ask me about my speech.