Greene “Won’t Back Down”, Refuses to Resign Despite Demands for Her Removal

Clearly enjoying seeing her name all over the media, Marjorie Taylor Greene is soaking up all of the free air she can before her actions eventually lead to her removal from Congress. As more videos of Greene surface in the wake of the viral footage of her harassing Parkland survivor David Hogg, she has released a statement blaming her bad press on the Democrats and resolves to “keep fighting”.

Her presence in Congress is questionable at best, considering she ran unopposed after her supporters harassed her Democratic challenger so badly, he moved his family out of the state of Georgia once he was forced out of the race. Her fellow freshmen Lauren Boebert and Madison Cawthorn also managed to win their races under similarly suspicious circumstances–Boebert has a rap sheet longer than her arm that should have not only kept her from running but also from obtaining a license to carry her Glock in Washington, D.C. Cawthorn is also drawing criticism for his outlandish statements and election win.

Just this week, videos and online comments revealed that Greene believes the Sandy Hook and Parkland mass shootings were hoaxes and promoted claims that Hillary Clinton gruesomely murdered children. Content from Greene’s social media pages showed her endorsing calls to execute FBI agents deemed disloyal to Donald Trump and to target top Democrats, including “a bullet to the head” for Speaker Nancy Pelosi.

On Twitter, Greene called CNN’s story a “hit piece on me focused on my time before running for political office,” while also suggesting that responsibility for the content lay with “teams of people” managing her social media accounts despite the coverage using her own videos and posts.

On Twitter, Greene called CNN’s story a “hit piece on me focused on my time before running for political office,” while also suggesting that responsibility for the content lay with “teams of people” managing her social media accounts. But previously unreported video footage obtained by Mother Jones reveals that Greene continued using violent rhetoric just before the November elections.

On October 27, one week before Election Day, Greene sat down for a live interview with pro-gun activist Chris Dorr broadcast on Facebook from a Pennsylvania gun shop. In the 22-minute video, posted by the Pennsylvania Firearms Association, the two held forth about the Second Amendment and the necessity of backing Trump and other far-right Republicans in the election. Greene warned ominously about fending off “socialists” like Joe Biden and Bernie Sanders, claiming they would confiscate Americans’ guns. “If this generation doesn’t stand up and defend freedom, it’s gone,” Greene said, addressing viewers. “And once it’s gone, freedom doesn’t come back by itself. The only way you get your freedoms back is it’s earned with the price of blood.”

I’m blocked by @RepMTG on her personal account where she posted this Qrazy Qrapola, while it’s not on her official account. Tell me again how you hate censorship, #MarjorieManson 🖕🏻#ExpelGreene pic.twitter.com/LOYeWUifgW 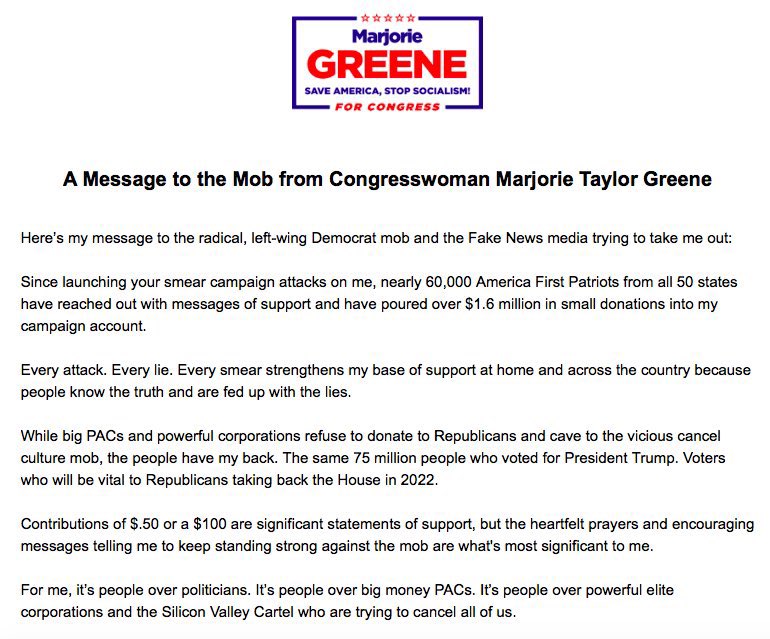 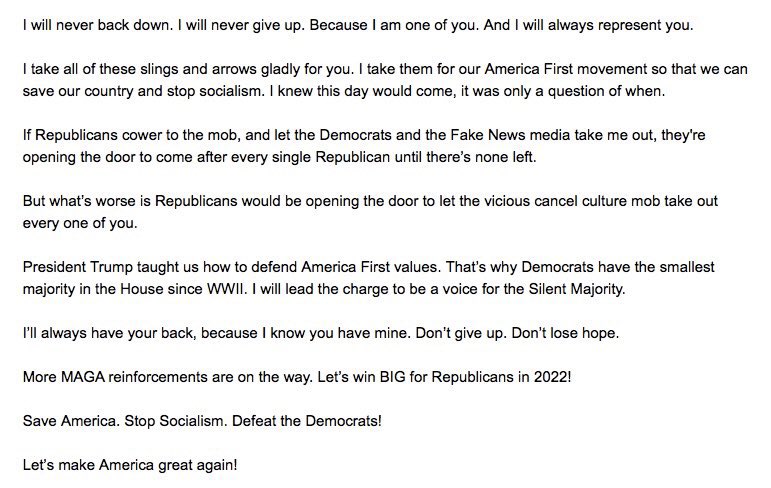 Calls for Greene’s removal seem to have fallen on deaf ears in the GOP, where House Republican Minority Leader remained silent regarding Greene.

I’m from Marjorie Taylor Greene’s District and I would like to say something pic.twitter.com/ktnVp9vexg