GOP leaders in the House and the Senate on Monday denounced a pair of far-right Trump allies — Reps. Marjorie Taylor Greene (R-GA) and Paul Gosar (R-AZ) — for speaking at a gathering of white nationalists in Florida over the weekend.

Greene and Gosar spoke over the weekend at the far-right America First Political Action Conference (AFPAC) at a hotel in Orlando, Florida, an event organized by Nicholas Fuentes, a white nationalist activist who gained national prominence after he attended the 2017 Unite the Right rally in Charlottesville, Virginia, and has praised Russian President Vladimir Putin as “brilliant” in recent days as he ordered his military to invade Ukraine, an American ally. 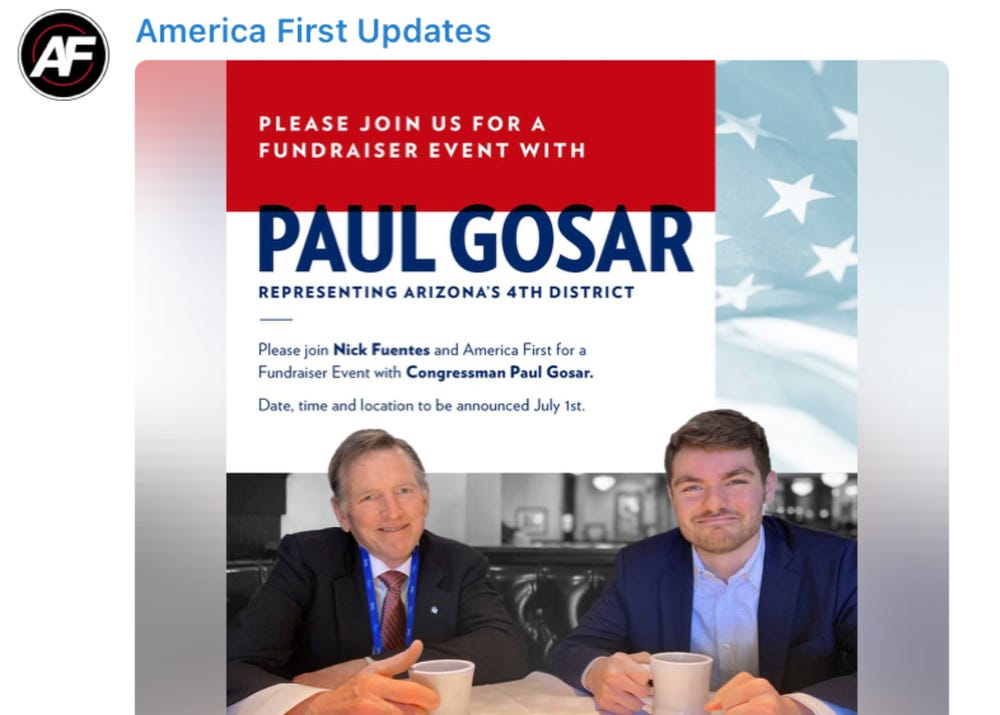 Gosar attended the Fuentes event last year in person and addressed the gathering over the weekend in a recorded video. Before he introduced Greene in Orlando, Fuentes appeared to offer praise for Adolf Hitler, to whom Democrats have been comparing Putin. “Now they’re going on about Russia and Vladimir Putin is Hitler — they say that’s not a good thing,” he said. Fuentes then urged the crowd to rally behind Russia in its war with Ukraine; the crowd chanted back: “Putin! Putin!”

"Now they're going on about Russia and Vladimir Putin is Hitler they say that's not a good thing." pic.twitter.com/6vvyNGO2m7

It’s rare to see criticism of fellow Republican lawmakers by GOP leaders, the fierce condemnation of Greene and Gosar from Republicans across the political spectrum highlighted just how the two represent a major political liability for the party as it seeks to win back control of the House and the Senate this fall.

“The question is: What are you actually gonna do about it, Kevin?”

My #minirant tonight on how House GOP leader Kevin McCarthy has verbally condemned Gosar and Greene for speaking at a Holocaust-denier's conference but taken no actual action against them:pic.twitter.com/S4TDqIkxkt

“There’s no place in the Republican Party for white supremacists or antisemitism,” Senate Minority Leader Mitch McConnell (R-KY) said in a terse statement. House Minority Leader Kevin McCarthy (R-CA) told reporters that it was “appalling and wrong” for the two lawmakers to attend the meeting in Florida and that he plans to discuss the matter with them. “There’s no place in our party for any of this. … The party should not be associated any time, any place with somebody who is antisemitic,” said McCarthy, who recently returned from leading a delegation of House Republicans to Israel. “This is unacceptable.”

Important, developing story: a sitting House Republican, @RepMTG, participated in the conference below last night. Hosted by a white nationalist, Nick Fuentes, with praise of Putin.

Hours after her appearance there, she was warmly welcomed at CPAC.pic.twitter.com/iH1ZxLWYIm

Sen. Mitt Romney (R-UT) called Greene and Gosar “morons” in an appearance on CNN, while Rep. Liz Cheney (R-WY) said her House colleagues are promoting antisemitism and white supremacy that is “a toxin in the bloodstream.” Even some high-profile Trump allies said they were disgusted. Former Secretary of State Mike Pompeo tweeted that Greene was “playing footsie” with “antisemitic neo-Nazis.” And Rep. Jim Banks, (R-IN), the head of the conservative Republican Study Committee, also didn’t hold back. “It’s unbecoming for a member of Congress to speak at an event that’s promoted by anyone who espouses those views,” Banks told NBC News. “This is an event that no Republican should attend … and it’s unfortunate that she did.”

Far-right congressional candidate Neil Kumar calls Nick Fuentes and the Groypers a bunch of sellouts for chasing clout by "simping for this serial adulterer who wears hot pants everywhere she goes. Marjorie [Taylor Greene] is a pathological liar and a total fraud." pic.twitter.com/j6RZKSscKf

House Minority Whip Steve Scalise (R-LA) whose own political career nearly ended after it was reported that he had addressed white supremacists in 2002, generally condemned antisemitism and racism, but then pushed a falsehood that Greene had distanced herself from the remarks of the event organizer. “There’s no place in America for antisemitism, for hate speech and thought that any race is purer than any other,” Scalise told NBC News. “It’s my understanding Marjorie had condemned the remarks that the leader of that group made, and obviously he made some statements that were racist and antisemitic,” Scalise said. “We don’t condone those, and we reject it.” Greene had actually denied knowing Fuentes to CBS News moments before he introduced her.

Nice try. You stood shoulder to shoulder with Holocaust-denying white supremacist Nick Fuentes after his crowd cheered for Putin against Ukraine. You’re a traitor. Nothing will change this. You’re a disgrace to the United States. Evil.