He’s a member of the House Select Committee investigating the January 6th insurrection now, but Rep. Adam Kinzinger (R-IL) wasn’t always so openly supportive of investigations into Donald Trump’s actions. Kinzinger voted against convicting Trump during his first impeachment trial, and it’s something he now says he regrets.

In a Twitter thread posted on Friday, Rep. Kinzinger apologized for not seeing what was right in front of him at the time, but with the benefit of hindsight, “My biggest regret was voting against the first impeachment of Donald Trump,” he tweeted. 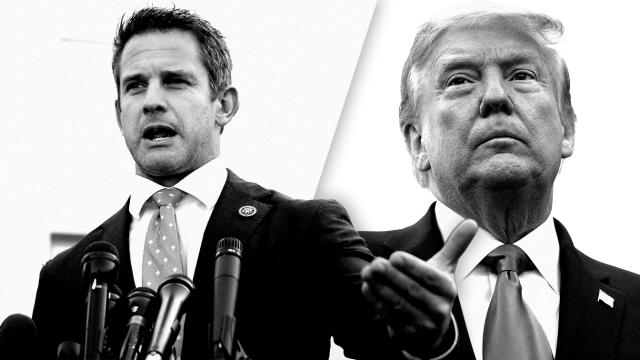 Just last month, Rep. Kinzinger appeared on CNN and told “New Day” host John Berman that he planned to teach his infant son about Trump as soon as he was old enough to understand. “I’m going to tell him he was the worst president the United States of America ever had. He was a liar. He was a charlatan,” Kinzinger said. “And he was a man with a more fragile ego than anybody I’ve ever met, which the irony of it is, he walks around like the tough guy, but he’s the one that gets more offended and wounded and sad than anybody I know.”

“It’s important for political leaders to be transparent and admit regret when needed. The bottom line, Donald Trump withheld lethal aid to Ukraine so he could use it as leverage for his campaign,” Kinzinger explained in his Twitter thread. “This is a shameful and illegal act, directly hurting the Ukraine defense today,” wrote Kinzinger, who was deployed to the US-Mexico border in 2019 in his role as a Lt. Colonel in the Air National Guard.

Thread (and admission): 1) I want to be honest, in congress I have only a few votes that in hindset, I regret. My biggest regret was voting against the first impeachment of Donald Trump.

Kinzinger did vote to impeach Trump for inciting the January 6th attack on the U.S. Capitol, and was later recruited by Democratic House Speaker Nancy Pelosi to sit on the House Select Committee along with Vice Chair Rep. Liz Cheney (R-WY). He added in his thread that Lt. Col. Alexander Vindman and others “deserve our appreciation” for their roles in telling the truth of Trump’s attempted extortion of the Ukrainian president.

3) I wish i could go back in time and Vote for it, but I cannot. What we can do now is to ensure that this NEVER happens again, and that we all put the interests of our nation above our party. @AVindman and others deserve our appreciation.