A former U.S. ambassador to Canada said groups in the U.S. need to cease interfering in what many call “an occupation” in Canada’s capital as protesters opposed to vaccine mandates and COVID-19 restrictions held rallies in cities across the country in a show of solidarity with a week-long demonstration in Ottawa. Some protesters set fireworks on the grounds of the National War Memorial late Friday. A number have carried signs and flags with swastikas last weekend and compared vaccine mandates to fascism, leading many Canadians to express their outrage over the crude behavior.

Bruce Heyman, a former U.S. ambassador under President Barack Obama, responded late Saturday to complaints from prominent Republicans who were openly supporting a fundraising effort supporting the protest that had recently been shuttered by GoFundMe. 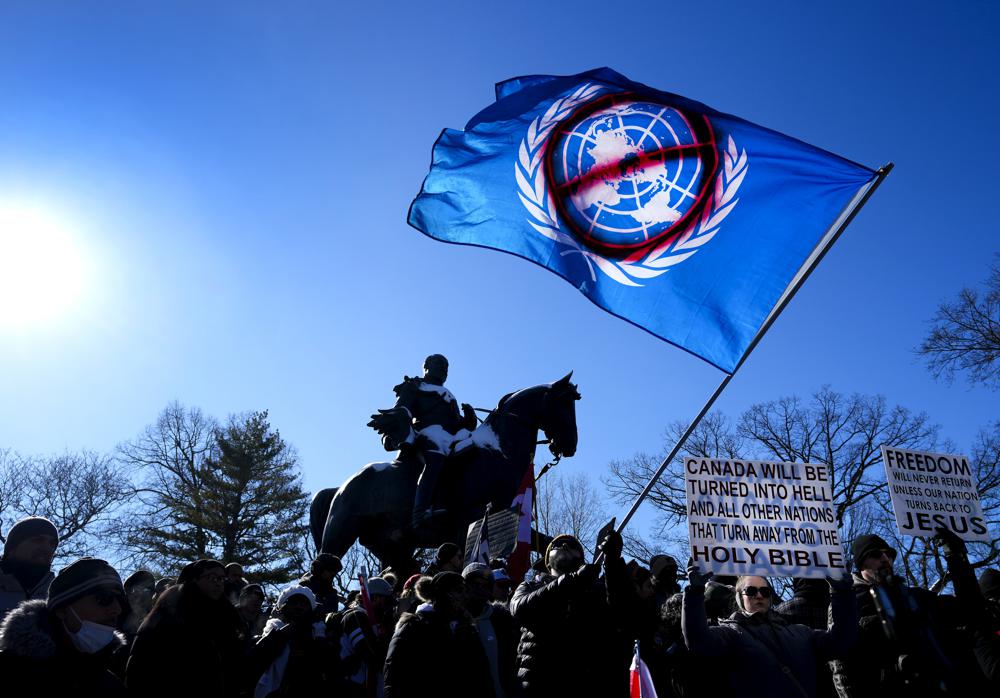 The “freedom truck convoy” has attracted support from Donald Trump and many Republicans. “The Freedom Convoy is peacefully protesting the harsh policies of far left lunatic Justin Trudeau who has destroyed Canada with insane Covid mandates,” Trump said in a statement released Friday. After the crowdfunding site said it would refund or redirect to charities the vast majority of millions raised by demonstrators protesting COVID-19 measures in the Canadian capital, prominent U.S. Republicans like Florida Gov. Ron DeSantis complained. “It is a fraud for @gofundme to commandeer $9M in donations sent to support truckers and give it to causes of their own choosing,” DeSantis tweeted. Texas Attorney General Ken Paxon tweeted: “Patriotic Texans donated to Canadian truckers’ worthy cause.” Texas Sen. Ted Cruz said on Fox News the Canadian “government doesn’t have the right to force you to comply to their arbitrary mandates.”

Under no circumstances should any group in the USA fund disruptive activities in Canada. Period. Full stop.

But Heyman was a voice of reason amid the cacophony. “Under no circumstances should any group in the USA fund disruptive activities in Canada. Period. Full stop,” Bruce Heyman, a former U.S. ambassador under President Barack Obama, responded late Saturday.

Did you know that Americans are funding the Canadian truck convoy?

Did u know that 85% of Canadians have been vaccinated

Did u know that Canadians do not agree with this protest?

Did u know they are people flying trump flag

He added he would investigate these deceptive practices and donors should be given a refund. But GoFundMe had already changed its mind and said it would be issuing refunds to all. GoFundMe said it cut off funding for the organizers because it had determined the effort violated the site’s terms of service due to unlawful activity. Ontario Premier Doug Ford is calling it an occupation.

While we cannot direct the police, we have provided the city of Ottawa everything they have asked for and will continue to provide whatever support they request.