David Weissman famously renounced Donald Trump and the MAGA movement after having a lengthy Twitter conversation with comedian Sarah Silverman and writing a letter of apology to Hillary Clinton that went viral. He has now fully embraced his inner liberal Democrat after spending 2016 trolling the left. Weissman often reaches out to those who remain faithful to the MAGA movement, hoping they’ll be able to see the truth the same way he did. While some have questioned his motives (MAGA trolls will suggest he’s just pretending to support the Democratic agenda), most have embraced him as another strong voice in the Resistance.

His attempts often fall on deaf ears, but Weissman’s unique perspective on the MAGA mindset has helped other Democrats understand just how the collective hive mind of Cult 45 operates. More often than not, Weissman’s tweets are all about how he was able to open his mind to the truth about Trump, and his hopes that others will soon follow his lead.

Now Weissman, an Army veteran, is reaching out to the Republican members of the Senate to ask them to pass the American Rescue Bill. House Democrats passed the bill without a single Republican vote in support of it, and the concern is that Republicans will use the filibuster and block the provisions Americans most desperately need.

“By no means do I claim to be an expert in business or in Bill passing,” Weissman tweeted, “but people are struggling and I’m blessed with a platform so if I can help, why not?”

.@senategop,
Please read my attached letter in regards to President Joe Biden’s #AmericanRescuePlan Bill. The American can't wait for 2022 to be fought for during this time, thank you. pic.twitter.com/uGD32ElEbU 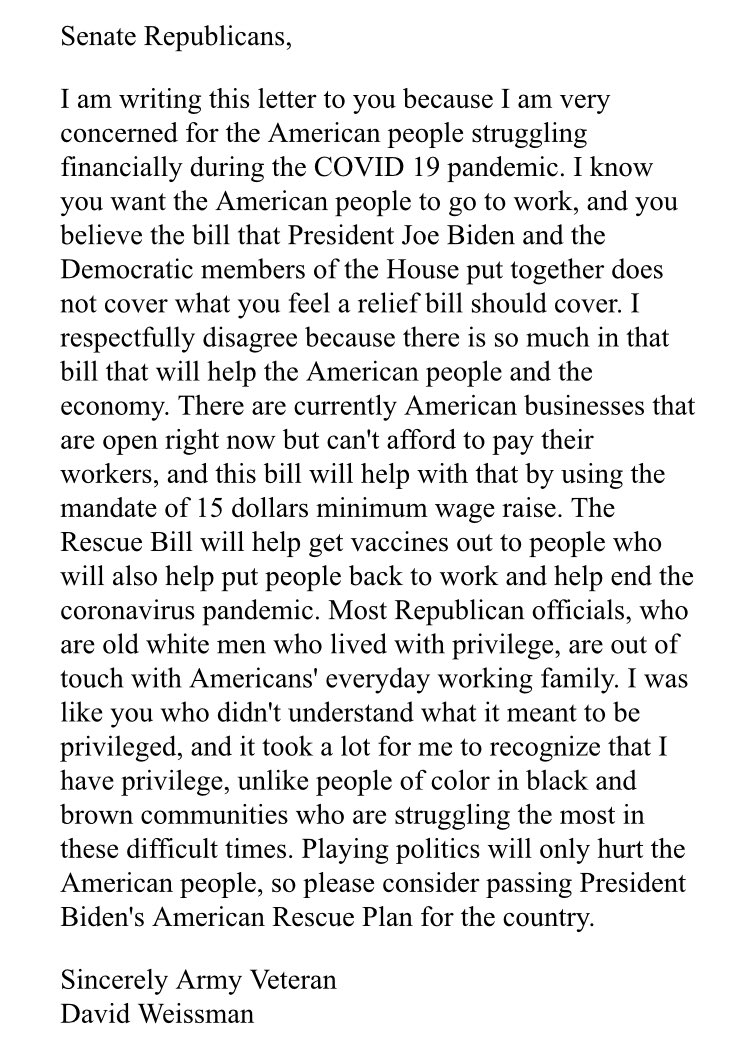 Weissman, who’s gained a following of just over 300,000, tagged a group of progressive Democrats in the tweet in the hopes they’ll share it with their colleagues across the aisle. His effort is gaining a warm response so far, and even though he knows it’ll most likely never be seen by his intended targets, he’s not the kind of guy who’s going to stop trying.

#CPAC2021 conservatives, Dems are not going to take your guns away nor are they going to take free speech away. The first amendment prevents the government from interfering with the rules of private organizations' platforms. Learn the full context of the 1st and 2nd Amendments.