U.S. Speeds Up Entry For Ukrainians Crossing at Mexican Border

CNN exclusively reported on Friday that Donald Trump, Jr was in touch with his father’s Chief of Staff, Mark Meadows, regarding overturning the results of the 2020 Presidential election while the votes were still being tallied. Trump Jr texted Meadows that “we have operational control” to ensure his father would get a second term, with Republican majorities in the US Senate and swing state legislatures, CNN learned.

In the text, which has not been previously reported, Trump Jr lays out his ideas for keeping his father in power by subverting the Electoral College process, according to the message reviewed by CNN. The text is among records obtained by the January 6th House Select Committee. “It’s very simple,” Trump Jr. texted to Meadows on November 5, adding later in the same conversation: “We have multiple paths We control them all.” 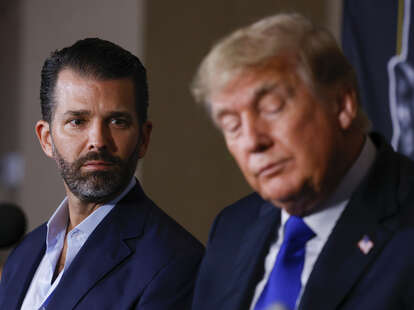 CNN found that the November 5 text message outlined a strategy that’s “nearly identical” to what Donald Trump’s allies attempted to carry out in the months that followed. Trump Jr. makes specific reference to filing lawsuits and advocating recounts to prevent certain swing states from certifying their results, as well as having a handful of Republican statehouses put forward slates of fake “Trump electors.” If all that failed, according to the Trump Jr. text, GOP lawmakers in Congress could “simply vote to reinstall Trump as President” on January 6th. “We have operational control Total leverage,” the message from Trump Jr to Meadows reads. “Moral High Ground POTUS must start 2nd term now.”

It's under all of the cocaine in Florida #CokeDripJr pic.twitter.com/yphF54W8Lr

The strategy floated by Trump Jr. is similar to what was outlined by former Texas Governor and Trump Energy Secretary Rick Perry, who texted Meadows on November 4th suggesting three state legislatures ignore the will of their voters and deliver their states’ electors to Trump.