Fox News host, Tucker Carlson, is facing allegations that he is spreading “hate Speech” by Joe Biden’s campaign. The cable news host displayed a white supremacist slogan, according to many who were watching on Tuesday night. The message appeared on a chyron while Carlson was conducting a segment about Sen. Tammy Duckworth and Rep. Ilhan Omar. Omar is among the first Muslim woman to serve in Congress and Duckworth is a combat veteran and is an Asian American.

The chyron read, “We have to fight to preserve our nation & heritage.” Twitter users were quick to point out how similar the chyron was to the actually white supremacist 14 words that say, “I guess the @FoxNews graphics producer who handled the segment had to tell [Carlson] that the chyron didn’t have room for all 14 words.” Jeff Yang who is a CNN contributor said, “Tucker must be absolutely fuming that all 14 words wouldn’t fit.” 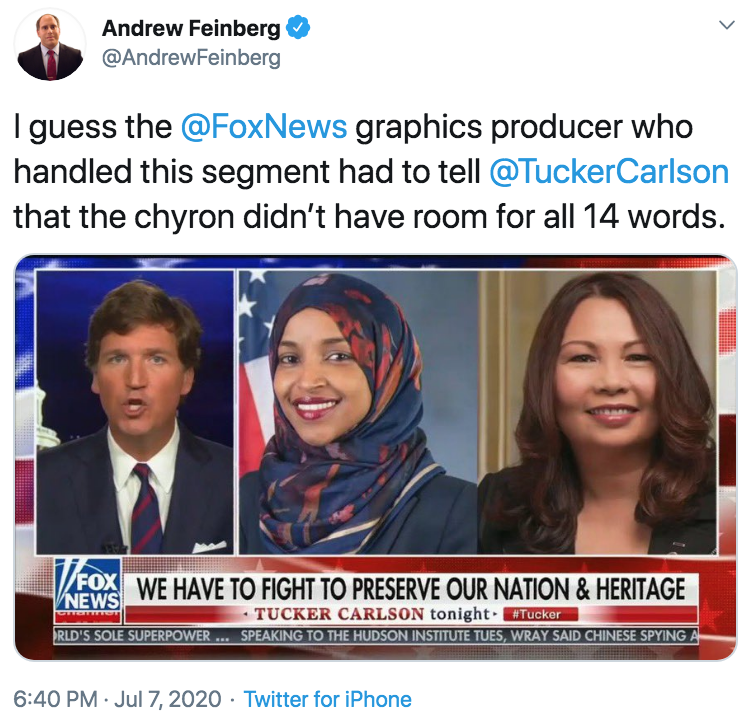 The words appeared just as Carlson was going after Duckworth for wanting to remove Confederate statues. What seems to have set Carlson off was Duckworth’s opinion that President Trump should not pay homage to “dead traitors” who served the Confederate States. Sen. Duckworth fired back at Carlson by telling him to “walk a mile in my legs” when Carlson opined that she and others who want to take down statues “actually hate America.”

Carlson went back to the same attacks on Duckworth, calling her a “coward” a “fraud” and a “moron.” You can read the full article here.