Editor’s Note: DemCast is an advocacy-based 501(c)4 nonprofit. They have made the decision to build a media site free of outside influence. There are no ads. They do not get paid for clicks. If you appreciate their content, please consider a small monthly donation. HillReporter gladly donates this space to DemCast free of charge.
-BDG

DemCast, along with Indivisible and Stand Up America are announcing that more than 30 advocacy groups and grassroots organizations have joined Protect the Results, a new project creating the infrastructure needed to mobilize millions of Americans should Donald Trump contest the election results, refuse to concede after losing, or claim victory before all the votes are counted.

The 30 partners will join DemCast, Indivisible, and Stand Up America in preparing to mobilize their members, engage experts and academics to educate the public about the threat Trump poses to the peaceful transition of power, and build a network of millions of Americans ready to take action. The groups joining the coalition will launch national digital ads to encourage Americans to join the network and reach out directly to millions of community members via text, email, and social media.

The new partners joining the project include several of the largest grassroots organizations in the country, progressive and conservative advocacy groups, and a labor union:

“If there’s anything we’ve learned in the Trump era, it’s that we have to be prepared for all possibilities,” said Shane Larson, Communications Workers of America Senior Director for Government Affairs and Policy. “If Trump in his escalating efforts to turn this country’s democracy into a one-man show refuses to leave office, we are ready to mobilize our members and take to the streets to protect the integrity of our elections.”
Join Now

“Community Change Action is building a powerhouse of low-income voters, voters of color, immigrant voters, and women voters in our largest and most impactful electoral program to date. Part of building this electoral powerhouse in 2020 is our commitment to fight for accessible, fair and safe elections—including protecting the integrity of the results,” said Community Change Action. “We believe that movements led by impacted people, like the Black Lives Matter movement, the immigrant rights movement, the labor movement, and more, are the foundation of a healthy democracy and we will work to ensure those voices are heard in the streets and at the ballot box.”

“Progressives need to be prepared to fight back against any attempt to undermine the legitimacy of our democracy, including a Bush v. Gore 2.0 scenario,” said Chris Kang, Chief Counsel and Co-Founder of Demand Justice. “Supreme Court decisions this year restricting voting rights in Wisconsin, Alabama, and Florida have already made clear that Republicans will stop at nothing to cling to power. As the five Republican-appointed justices have shown they are all too willing to subvert democracy if it helps Republicans hold onto power, we must be ready to protect the integrity of this election.”

“We take Donald Trump at his word that he’s a sore loser,” said David Sievers, Campaign Director at MoveOn. “But democracy does not have a special carve-out that sore losers get to stay in office as long as they like. We’re prepared to take action to defend the results.”

“Trump has spent the last four years decimating democratic norms and rule of law,” said Aquene Freechild, Campaign Co-Director for Public Citizen’s Democracy Is For People Campaign. “He’s already said that he’d question election results if he loses in November. We can’t be surprised. Every American who loves freedom and democracy must be prepared.”

“Over the last four years, Trump has done everything he can to try to erase our voices and instill fear in our communities. But we’re here to stay and to win in November. For immigrants and people of color, this election is the fight of our lives. The immigrant youth movement has helped turn public opinion and the electorate against Trump. We will organize and mobilize a massive number of voters. With allies across the country, we’re going to vote Trump out of office in November,” said Cristina Jimenez, Executive Director and Co-founder of United We Dream Action. “Together, we will ensure that every vote is counted and that we protect our democracy.” 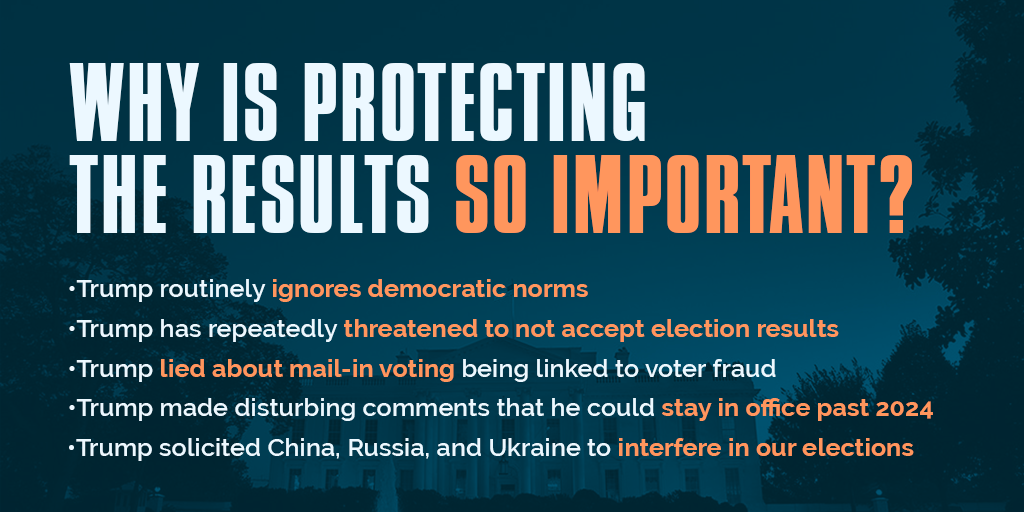 The announcement comes after Trump once again refused to say whether he would accept the results of the 2020 election: “I have to see. I’m not just going to say yes. I’m not going to say no.” These latest comments follow a pattern of Trump undermining the election, from making false claims that mail-in voting leads to rampant voter fraud to disturbing comments about staying in office past 2024.

This has never been more urgent, as just today Trump has threatened to delay the election, which he has no legal authority to do.

DemCast is an advocacy-based 501(c)4 nonprofit. They have made the decision to build a media site free of outside influence. There are no ads. They do not get paid for clicks. If you appreciate their content, please consider a small monthly donation.

[COMMENTARY] What Really Happened on the “Plane Full of Anarchists”

[COMMENTARY] #RescueOurVotes: Because It’s up to Us.