This is the same fine person who said he’d be “hunting ‘LGBT supporters” at Target stores during Pride Month and also has been filmed harassing Black Lives Matter protesters. Schmidt also has a history of making right-wing extremist short videos including a harassment campaign against an Arizona wig shop that serves cancer patients and has also filmed himself harassing people waiting to get COVID vaccines. 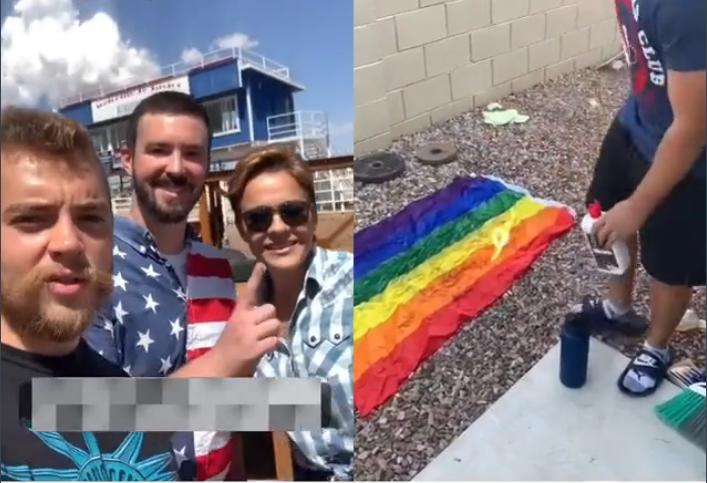 His association with the Trump-endorsed Lake has continued despite his criminal profile, and they have been photographed and filmed together repeatedly, with Lake seemingly delighted to be seen with a fellow white nationalist. Another Arizona Antisemite, Wendy Rogers, who blocked me on Twitter forever ago for calling her a white supremacist, also loves Ethan. Wow, his parents must be really terrible!

Kari Lake refuses to publicly denounce Ethan who is now stating he will “hunt LGBT supporters” at Target and across Phoenix. pic.twitter.com/FB9Ue831G9

Ethan’s Sunday started out fine for him, but ended with him finding out.

Ethan posted videos with what appeared to be militia members.

One man said, “restoration is coming by ballot or by bullet.” pic.twitter.com/AecMkt0hOU

But then the long arm of the law finally caught up to ol Ethan, who lost his cool pretty fast.

Ethan Schmidt was arrested after harassing people at the March For Our Lives rally in Phoenix. pic.twitter.com/SofYObVcBi

It’s pure entertainment to watch someone who thinks his white male privilege extends farther than it actually does taken down a peg. Not that Ethan is going to suffer any real consequences. I’m sure his terrible parents have tons of cash and will bail him out in enough time to harass more cancer patients and LGBTQ people just living their lives.

Ethan Schmidt being arrested for a warrant in Mesa. pic.twitter.com/QVfhwY4OPM

As always, thanks to our pal Patriot Takes for finding the absolute bottom of the bottom dwellers for us.