{DISCLAIMER: Before I begin this COMMENTARY, which means it’s an OPINION piece, please be aware I will not be writing about mass shootings perpetrated by non-white males because I already know they have happened, but they do not happen as often as mass shootings perpetrated by white males. False equivalence counter-arguments are for social media, so I’ll see you over on Twitter for that, thanks}

There is a pattern.

First, the news breaks that there’s been another mass shooting in America. A swell of TV news coverage and social media begins in concert, often with misinformation being shared online speculation grows about shooter and motive based on the location. Lo and behold the shooter is a white male, usually between 20 – 50, who used an AR-15 he easily acquired thanks to loose waiting period laws or a parent’s unlocked gun cabinet. The shooter is almost never critically injured and is treated fairly by police, sometimes even given a fast food meal, but almost always taken into custody while still alive. The outrage continues as the demand grows louder for stricter gun laws from gun reform activists while the gun-loving right screams about the Second Amendment. This part often comes with extreme trolling from obviously fake right-wing accounts meant to waste liberals’ time (don’t fall for it! Report, block, move on, repeat!).

After a couple of days in the news cycle, the story fades thanks to whatever’s taken its place, and the argument over gun reform that was boiling over then returns to a simmer, just waiting for the heat to be turned back up again. Because in America, it’ll happen again. And it often happens in clusters, with other mass shootings happening weeks or even days apart like we saw this last week in Atlanta and Boulder.

Early photos of the shooter in Boulder made it seem like another white man had mass murdered innocent people in what should be a safe space for them. We are so used to this sad pattern that myself and others tweeted about another white male shooter before we individually learned otherwise. Because we read that the police took him into custody alive. Because we saw a grainy photo of him in handcuffs.

Boulder shooting suspect: He had previously attacked classmate, had a criminal record and was also known to police for a criminal mischief incident. Yet he got an AR-15. https://t.co/SXm5eK3ckc via @denverpost

As soon as I found out he had been identified as an American Muslim of Syrian descent who professed to hate Trump’s Islamophobia (thankfully, I learned all of this within moments of tweeting), I immediately deleted my tweet and wrote another one to apologize for being misinformed (quick sidebar: take a note, Republicans).

The Boulder shooter was not a white man, I apologize for my error. I deleted my tweet.

But how easy for me to assume that, though, right? That’s where we are as a country.

What is happening to young men in this country? #EndGunViolence

I also made the same mistake & had to delete a tweet. It’s unfortunate that when a mass murderer survives in this country we automatically assume he must be white, because that’s what our recent history has taught us #EndGunViolence https://t.co/AQ4khzmB5J

Both Meena and I have been getting trolled by the MAGAts for basically having the same reaction a lot of people had, but we’re women with blue checkmarks, so it makes us easy targets for weak manufactured fake accounts. 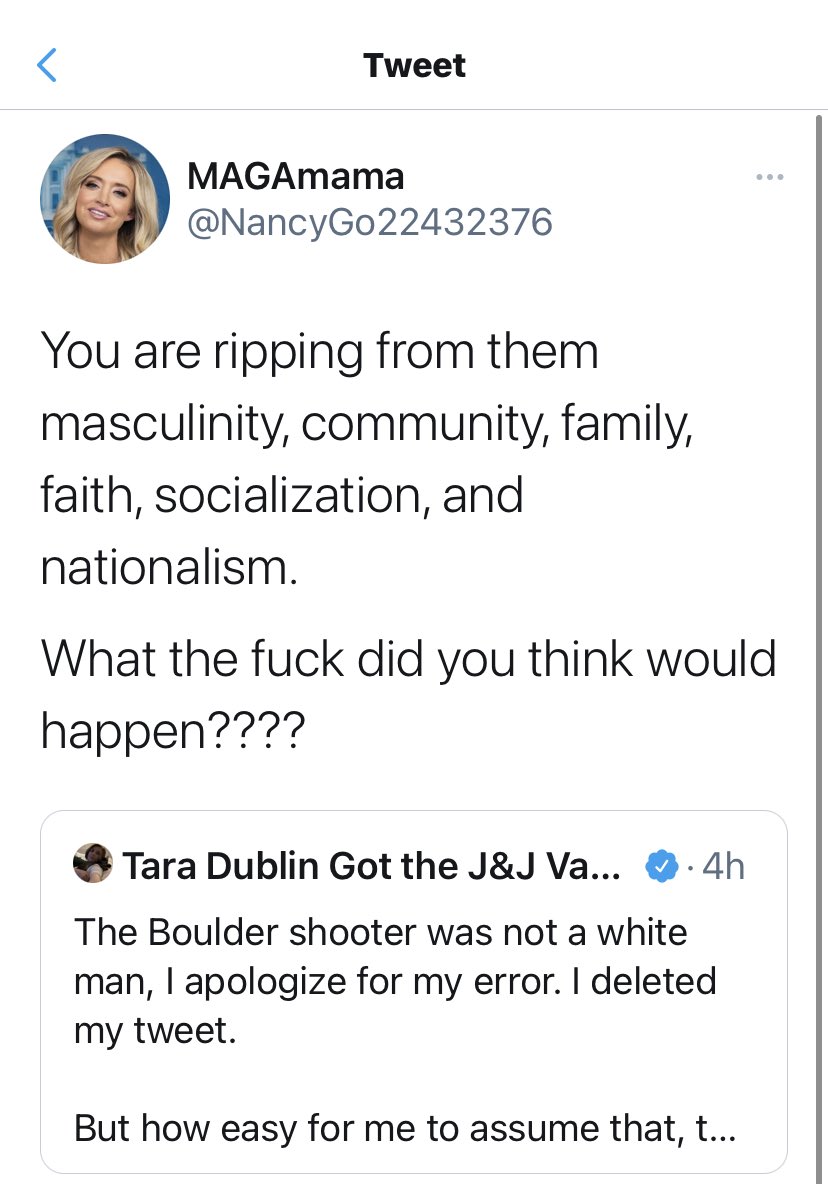 Thanks, Nancy Bunchanumbers, but I know what’s what:

The Russians gave the NRA a ton of money to buy Republicans so they could control them. Then they pushed the messaging to their mostly white male base: GUNS ARE MACHO AND THE DEMS WANT TO TAKE ALL Y’ALL GUNS AWAY DON’T LET EM TAKE YOUR GOD-GIVEN GUNS AND NOW GIVE US ALL YOUR MONEYS, MAGA!

Crazy that a business model like that eventually hustled them into bankruptcy and restructuring, I know. White guys finish last, except they keep thinking they’re finishing first, because white male entitlement and systemic racism, yay!

"no racial history at all"

24 hours 18 minutes is the filibuster record set by South Carolina segregationist Strom Thurmond in a failed attempt to block the Civil Rights Act of 1957. https://t.co/ej2ddapmaD

So ANYWAY, my point in all of this is that nobody NEEDS an AR-15 if they’re not currently serving in one of the Armed Forces. The responsible gun owners out there know this as well. If you’re not relying on your ability to hunt, kill, and break down a whole deer so your family has enough venison for the winter, then you don’t need a great big rifle. Get an alarm system or one of those doorbells with a camera, they don’t kill anyone when they accidentally go off.

Tell me again why your right to get your jollies shooting AR-15’s at paper targets, matters more than her right to have a father? 💔💔💔 https://t.co/A6CCEvXUrF

I'll keep my gun's thanks.. and when someone circumnavigates your alarm system, lets hope there is a good guy with a gun nearby to save your ass..

What exactly is in your home that someone else wants? If it’s not any of the humans, it can be replaced. What’s the most expensive thing you own? Take out the insurance you need so that if you’re asked to choose a material object over your life, you can surrender it without saying something dumb like, “But my husband gave me that ring for Christmas!”

If anyone broke into my apartment, they’d be really disappointed because the most expensive thing I own is nothing. Fortunately, the outside of the complex indicates that anyone looking to pick up some sweet merch with a five-fingered discount is casing the wrong joint. I hear couples fighting all the time and worry about domestic violence, because most of those mass shootings stem from an abusive home. Hurt people hurt people, as the saying goes. And they hurt so many more than just those they kill.

We'll tell their stories as their families allow.

President Biden is trying to make this country’s gun problem less of a problem, and I hope his plan succeeds. I want a Congress that votes to keep Americans alive. I want it to be so hard to get a gun that most people give up trying. But we also need to raise the young men of this country better so that getting a gun is literally the last thing they ever want.

We can ban assault weapons and high-capacity magazines.

We can close loopholes in our gun background check system.

This is not a partisan issue — it’s an American issue that will save lives. Congress needs to act.

We need to teach all of our kids to be allies to the communities they weren’t born into. Hate is carefully taught. Teaching equality is a step towards eradicating white male fragility and reducing hateful and violent crimes. Learning to express feelings in a healthy and non-violent manner should start early and be reinforced. And yes, mental healthcare at the earliest possible stages should a child begin to exhibit any behaviors that indicate they might harm themselves or others.

This doesn’t happen anywhere else like it happens here, and that’s a sentence I’d love to never have to say ever again.