Wayne LaPierre was rewarded by the NRA for his record-high body count as their board re-elected him their Vice President during their blood money convention in Texas just days after nineteen children and two teachers were massacred by a gunman with an easily obtained AR-15.

LaPierre probably celebrated his re-election by dancing with Donald Trump or something. 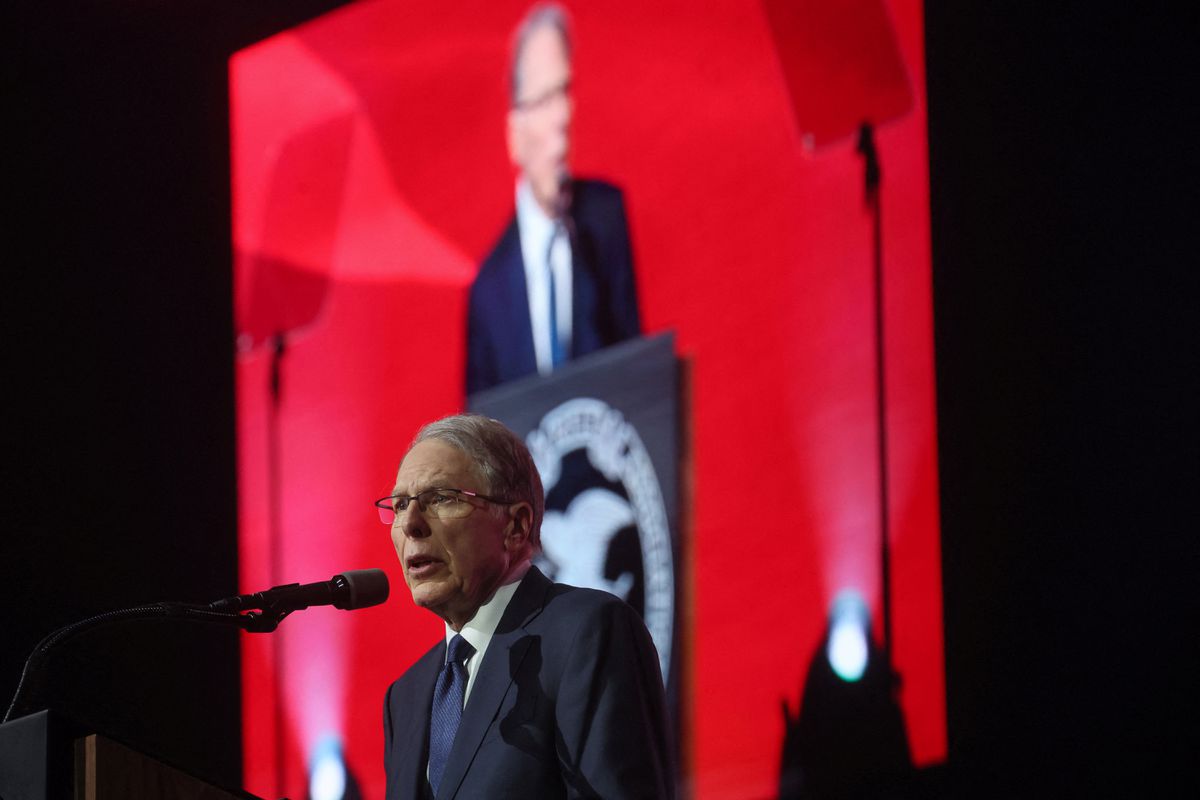 Bloomberg reported that “LaPierre avoided a no-confidence vote that would have ousted him from the post he’s held for more than 30 years, just days after a school massacre recharged the debate over US gun laws. The proposed vote didn’t concern the shooting, but was drafted by NRA dissidents unhappy with LaPierre’s leadership, which has come under withering internal criticism in recent years. The motion’s author, Robert Ryan of Arkansas, accused LaPierre of “cowardice” for failing to carry a firearm for personal protection.” So even the worst people who are somehow worse than LaPierre couldn’t prevent him from keeping his position, cool cool.

In the decade since, the “good guys” bought tens of millions more guns.

Fortunately, there are still people who are doing the real work by confronting LaPierre and his fellow National Rifle A-holes. Along with Beto O’Rourke holding a counter-protest outside the NRA Convention, The Good Liars actually went inside and spoke directly to LaPierre and the rest of the very white room full of overcompensating gun loonies who were too dumb to pick up on the very subtle sarcasm. Watch this glory and then treat your local GOP gun nuts accordingly.

We spoke directly to Wayne LaPierre at the NRA Convention and thanked him for all his thoughts and prayers. pic.twitter.com/EfdDrgD4Af

But there’s still plenty of opposition to overcome thanks to cranky old white men like LaPierre and his ancient fuddy-duddy buddies (who probably all wish they were allowed to say the n-word out loud whenever they want) believing that guns make everyone safer, when of course they never do. Herbert Louis, aka NRA Methuselah, was presented with a plaque for being the oldest member at the convention, and predicted gun-control efforts will intensify. The 96-year-old urged his fellows to resist. “It sounds to me like the Democrats want to take guns away from us because we’ll be the ones to rise up when they take over the country and it’s a damn dictatorship,” Louis said to loud applause.

Wayne LaPierre States Mass Shootings Can Be Perfectly Safe When Carried Out By A Trained, Responsible Gun Owner https://t.co/eYeLCD3tXi pic.twitter.com/2NSVFFSCxS

Ok, Grandpappy, please take your musket back to the plantation now. It’s 2022, and gun violence is now the number one killer of children in the United States instead of cancer. Your cold dead hands aren’t more important than dead kids.