I first met Clark County School District Superintendant Jesus Jara when he unleashed a firestorm. In the summer of 2019, when he announced, via video, that he would be eliminating the position of Dean in middle and high schools. 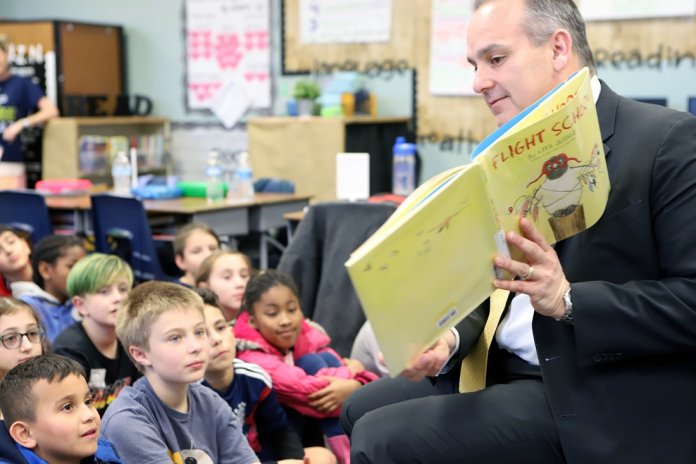 The decision, itself, did not seem out of line. Deans focus on punishment. Social workers and psychologists focus on problems that lead to bad behavior. And a new law – SB89 – had just passed the Legislature allocating $75 million in funding to change our model of discipline as a matter of school safety.

Also, the decision to eliminate deans would have plugged a $17 million budget hole for the year.

But, in what I would come to see as a pattern, Jara didn’t lay out his carefully thought-out plans. He didn’t explain how the district would focus on discipline. He didn’t tell us how teachers and admin could help. He didn’t articulate an alternative to the fact that the district’s efforts to promote teachers of color to admin ran through the bottom management rung of deans.

Like a Janga puzzle, there were a lot of intricate decisions that needed to be made to ensure that if you took this one piece away, it all wouldn’t fall down.

I figured Jara and his staff had talked through those decisions, but I was puzzled that they didn’t tell us what the thought process was.

But the district never got the safety money they were counting on from SB89. They had asked for $34 million. They received $12 million.

For me, this was a communications issue. If the decision to eliminate deans had another part to it, I didn’t see it in one bit of communication from Jara or his staff. Let’s put it this way: if they, in fact, had a solid discipline restructuring plan, they seemed to have absolutely no plan to explain it to the community.

Jara also came to a district that had recently moved to autonomous school zones that allow principals to control their own budgets – opting to move some of their dean money to promote a person into an AP position, for instance. Or using “carryover funds” to save some of their budget with an eye toward a bigger project.

The Dean’s decision took autonomy away from schools. It was a fiat that he expected principals to comply with. Principals told Jara that they wanted to make their own decisions on how to cut. Ultimately that’s what happened, as Jara retreated on deans.

But ignoring the role of the principals to begin with – or even just the fact that they are a powerful bloc he must navigate – was an indication that Jara did not like decentralization.

I started hearing from principals who were worried that the deans were the first salvo in dismantling the reorg – and that they were afraid the next salvo would be to take away carryover funds.

Now we know that the special legislative session necessitated by Covid-19 provided an opportunity for CCSD to request a suspension of the law that allows schools to keep carryover funds. We know that the discussion started as early as April. And that the first communications came from Jara, CFO Jason Goudie, and political director Brad Keating.

When it came to light that AB2 came from the district, Jara could have said, “Look, we need this money and we’re going to put it toward this and this and this.” But he didn’t do that. Even as I write this, we still don’t know what the district’s plan for the carryover money was. We have vague assertions that it would have gone to student learning. But… wouldn’t it have gone to student learning in the schools that saved the money?

He could have just said, “Look, we thought it was a good idea, but we see now it wasn’t. Let’s move on.” But instead, as we know, he blamed the carryover funds idea on state Superintendent Jhone Ebert – an assertion that earned a sharp rebuke from both Ebert and Gov. Steve Sisolak, who essentially called him a liar.

Equally important, the idea that Jara and his team were asking for carryover funds took the CCSD Board of Trustees by surprise.

As this was unfolding, Trustee Linda Cavazos was unwrapping another untruth: that the school district needed to submit a plan to the Nevada Department of Education to cover options for distance and in-person learning. Jara first told the Trustees that they needed to decide on a plan immediately because the state deadline was coming up. By the third meeting on the plan, he told the Trustees that they just needed to come up with something to satisfy the technicality that a plan be submitted – and they could change it after the fact.

Delta Variant Now Responsible for 10% of US COVID Cases

Then Cavazos called the Nevada Department of Education and was told the district never had to submit a plan on the various learning model options. They only had to submit their calendar changes.

And here we sit, on the eve of a special CCSD Trustee meeting that will decide if Jara remains the superintendent for this district. Three Trustees called the meeting. They only need a fourth to agree with them that they were lied to – at least twice – in important situations by their one employee.

Jara’s supporters seem to acknowledge that he was not telling the truth. But they want to ignore it. They assert that not ignoring it will take away from the daunting task of running a school district during the time of COVID.

And the argument they are making is that we need to focus on our children.

I don’t know about you, but I’ve been teaching my children for years that lying is bad.

I can’t help but look at the wider society, and the deflection that comes daily in our political discourse to understand that there’s a pattern here. A person in a position of power tried to do something behind the backs of his bosses, then lied about it and blamed someone else – like a little boy blaming his baby sister for the jar of jam smeared over the carpet. And both he and his supporters say that holding him accountable for that is “just politics” and “a distraction” from the real issues. As defined by them.

The real issue for me is that the superintendent of the largest district in the state has lost the trust of the governor of the state, not to mention the state superintendent of schools and legislators. A new legislative session begins in five months. A session in which CCSD hopes to get more funding.

In what world will that happen after this?

Governors don’t often rebuke local public employees. This extraordinary reality brings tomorrow night’s decision into sharp relief. Jara’s supporters are right about one thing: this is about politics. The “realpolitik” of getting what the entire district needs vs. the politics of blaming and distraction. It says something about where we are as a county – and a nation – that I have no idea which side will win.

Broadcast, digital and print journalist Carrie Kaufman has covered the Clark County School District for public radio and The Nevada Voice since 2015.