Once upon a time called 2002, the radio was a vast wasteland of nu-metal bands like Korn, Limp Bizkit, Staind, and Puddle of Mudd. Throwing their misspelled hats (most likely purchased at a Hot Topic in the world’s worst mall in Florida) into the ring was Trapt, who scored an actual Number One hit with “Headstrong“, which is indistinguishable from any of their other songs, or the songs by the other bands I mentioned, and I even hesitated to link to it because it’s an assault on anyone who can either see, hear, or both. Plus, I really don’t want to give those jamokes any more views.

Or, jamoke, because really the voice behind the “Trapt Official” Twitter was its lead singer, Chris Taylor Brown, who claims to be 39 but never emotionally progressed past the age of nine. Brown, the living embodiment of a poorly done tribal tattoo somehow become sentient, is also a Proud Boy proudly spewing moronic MAGAt nonsense to his followers, which peaked at 27K. For the past few years, he’s used the band’s social media pages as a way to promote their music and his support for Donald Trump. Earlier this year, he went on a pro-Trump rant at the start of the pandemic and eventually started social media beef with Ice T, Danny Diablo, and more. You know, because only maybe fourteen people are interested in seeing his “band” play. 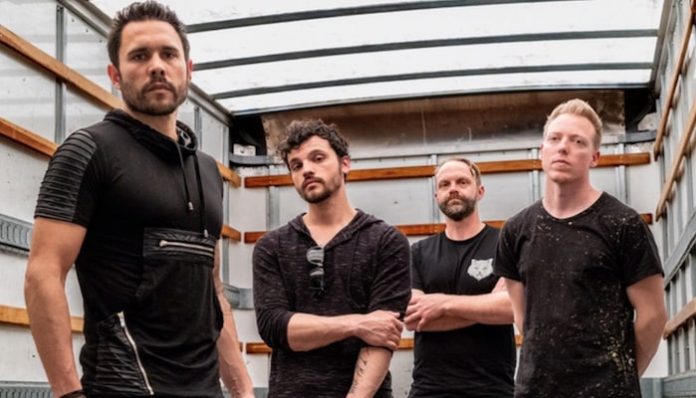 Trapt was banned from both Instagram and Facebook last month for posting a Proud Boys meme, which is against the platforms’ new Terms of Service. Brown went to Twitter to whine about it and say he was moving to Parler, the conservative app where users can spread all of the propaganda without being challenged by smart people. Brown subsequently claimed he was being bullied and went on to make anti-Semitic comments, blame George Floyd for his own death, and endorse the Proud Boys.

So Twitter user illtemperedCape decided to call him out for it on his podcast, and Brown didn’t like that, responding with a threat to sue.

Somewhere in their back and forth, another user chimed in about Brown’s questionable take on women not being able to rape men (as if there’s any other kind of take), and that’s when Brown set off a two-day Twitter firestorm when he casually tweeted what he felt was acceptable when it comes to statutory rape and pedophilia/ephebophilia.

“I don’t call a 24-year-old woman who takes advantage of a 15-year-old-boy who is entirely through puberty a pedophile,” he tweeted. Once the inevitable backlash ensued, Brown, for some reason, dug his heels in and bit back at anyone who challenged his definition of child rape.

“A 15-year-old male and a 25-year-old female is not pedophilia, you fucking moron,” he said to one user.

Remember the song Headstrong? I forgot who sang it… oh yeah, it was @TRAPTOFFICIAL, I wonder what’s going on with the band these da…. oh. Ohh no. 😬 pic.twitter.com/vmZVeEPgiY

I jumped in because I had had a run-in with Brown two months ago about the election, and he lost that one bigly. Also, I’m the mother of two sons who are 21 and 17, so I have some strong opinions on just how I’d take it if an adult woman put her hands on either of them at 15. Any human being should recognize everything that’s wrong with Brown’s statements, but parents and those who experienced sexual abuse were the most vocal in hitting that tweet with one of the larger ratios I’ve ever seen. Brown leaned on schoolyard bully type insults he thought would hit the target but kept missing repeatedly, kind of like his attempts to follow up his one hit song.

Well TRAPT is currently ending whatever future they have left. pic.twitter.com/km0jtLLOpN

Yes, he’d give a teenage boy who’d been sexually abused “high fives”, because he thinks the song “Hot For Teacher” by Van Halen is a true testimonial advocating for such things.

“You’re single and you’ll die alone,” was one of his weaker tweets to me. He also questioned my relationship with my father, and how I could possibly be a mother, all while standing his ground on being just fine with a teenage boy being abused by, say, his 25-year-old teacher. But this was a particular favorite in response to me and another female Twitter user that shows off who Chris Taylor Brown really is.

Over the course of Monday night, I think I reported at least fifty of his tweets. Then all of a sudden, he stopped responding. I suspected that meant he was in Twitter jail, though his account remained active and people were still dragging him when I went to sleep.

Tuesday morning I woke up to a glorious early Chanukah present. A friend had DM’d that Trapt’s account had been suspended, yay!

[COMMENTARY] Holiday Distractions 2021: Did Many Forget About Democracy?

Good thing I had a special screenshot to pair with it so I could also cash in on the receipts everyone else was throwing around.

How it started How it’s going #Trapt pic.twitter.com/NjZ2slq2kY

However, Chris has a personal account that was still active as of Tuesday evening, and he’s not only tweeting the same sick garbage, he blocked me there, yet he’s threatening to sue me now, which is about as scary as Scott Baio threatening to sue anyone. So if you’re on Twitter and you’re not busy, please go report this disgusting walking scab.

He already has people waiting for him on Parler, too.

I left a little surprise a few months ago on Parler just in case Trapt ever got suspended from twitter. Feeling very powerful right now. pic.twitter.com/TXHCejrReU

[COMMENTARY] Elon Musk ‘Threatening’ to ‘Walk Away’ From Twitter Deal