From Red Hat Nation to Ridin’ With Biden

Are you pissed you’re not having a real summer? Are you missing all of the sports and concerts and picnics and all the other things people used to take for granted? Does it make you mad you probably won’t have a real Halloween, Thanksgiving, or Christmas? Are you worried no one will kiss you on New Year’s because you can’t go to any parties because everyone is still dying? Would you like to have a real 2021 instead of a repeat of 2020?

The people who are dragging this out by not taking the proper precautions are the ones to blame. It didn’t have to be like this.

Imagine it’s not August, but early February 2020. You’re going about your life when a Breaking News story on MSNBC grabs your attention: Trump is about to address the nation on a very serious matter. While you never watch him if you can help it, you trust Nicolle Wallace when she tells you it’s a grave situation that the White House is taking seriously. The cameras switch to the White House Briefing Room, and Donald Trump emerges with a somber look on his face, his tie not grazing his belt for a change. He looks the most Presidential he’s ever looked, which isn’t saying much, but you sense something different about him. He takes the podium and without preamble, begins addressing the nation: 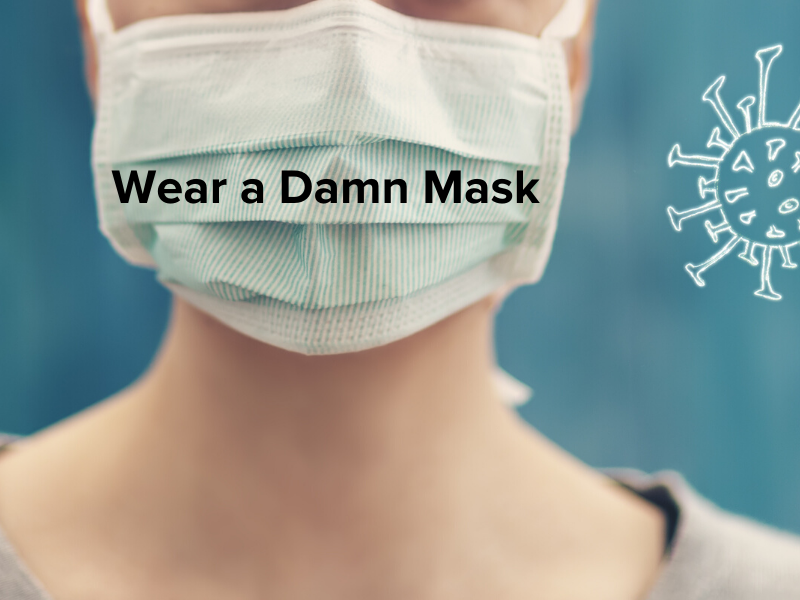 “My fellow Americans, it has come to our attention that the Coronavirus, also known as COVID19, is far deadlier and more infectious than initial reports indicated. If we don’t take swift action as a nation, we will see deaths of over 130,000 souls by July 4th Weekend. This cannot happen to the greatest country in the world, and so we are implementing strict federal guidelines to keep infection rates as low as possible. From now on, until the crisis has been either contained or a vaccine is available, all citizens will be required to wear protective masks when in public spaces. Social distancing of six feet must be maintained at all times. If you’re not able to follow these rules, there will be legal punishment. We have a responsibility as humans to protect each other. I’m also implementing a federal Stay Home order, which mandates any non-essential workers must stay at home unless they need food or medical assistance. There will be a website dedicated to COVID19 with daily updates as information becomes available. I trust Dr. Fauci and his team, plus everyone at the CDC, to make the health of our citizens their number one priority. We will get through this together.” Then he puts on a mask that says “Keep America Healthy!” and takes questions from the media, and he defers to the medical experts when he can’t answer a question himself.

Now that you’re done laughing, just take a moment to realize if he had done anything remotely like that, we wouldn’t be leading the world in Coronavirus deaths right now. We wouldn’t be seeing spikes in almost every state. Nick Cordero and Herman Cain would both most likely be alive. And I wouldn’t be getting tweets calling me a “sheep” for wearing a mask and staying home. If we had anything like real leadership, we wouldn’t still be riding the crest of the First Wave. We’d most likely be having a much more typical summer, with perhaps a few lingering cases, but with months of mask-wearing and social distancing under our collective belts, we’d be pros at it by now. We’d know how to safely enjoy the outdoors without endangering anyone else’s health.

But nooooo, as John Belushi used to say during one of his most beloved SNL routines. People had to go to a water park on Memorial Day Weekend. People had to demand their freedoms at the Michigan State Capital. People had to go to their megachurches and singspit all over each other. But the Black Lives Matter protests, you say. Yes, those crowd shots worried me on so many levels, including spreading disease. Fortunately, most of the protestors were wearing masks and other protective gear, and reports of new COVID cases from those protests seem low. Especially when you compare them to the meatpacking plants, nursing homes, and oh yeah, Trump rallies. We still don’t have enough tests. I haven’t been tested. My sons, who are sheltering at their father’s because he has a bigger place, also haven’t been tested. I know three people who have been tested: my mom and stepdad (both negative), and my friend’s roommate, who had to get a test because she was having surgery (also negative). But for every negative test, there are thousands, if not millions, of non-tested and possibly asymptomatic carriers who can infect a room with just one sneeze.

There are people out there who refuse to listen to actual doctors if Trump says the opposite. I’m well aware he wishes COVID19 would disappear from his life just like his daughter Tiffany, so he doesn’t have to think about it anymore. He’s in a situation of his own making, and we’re stuck in it too. If he’d only put on a mask in February. If only he’d told the truth just this one time. If only, if only, if only with this fucking guy.

You’re not a sheep if you stay home or wear a mask, you’re helping to prevent the spread of disease we still don’t know enough about and is already mutating. Surgeons can wear them for hours, you can wear one for the fifteen minutes you’re in a store (and why are you in a store, anyway? Order stuff online and support the Post Office!). Sadly, nothing we say or do will reach that subset of the population that would rather be angry bullies like their Dear Leader, so in love with their hate, they can’t be moved by even 130,000 dead Americans to do the right thing. And while karma may find them, they’re unfortunately also going to infect people who didn’t go Tulsa, or Mount Rushmore, or Portsmouth.

Find a cool mask online. They’re literally everywhere now. Instead of trashing a display, instead of physically assaulting a hostess at Chili’s, instead of screaming at people in Costco, make it a fashion statement. Nothing says “I’m paying attention to my fellow human beings” to me like seeing people wearing a mask. You genuinely don’t have a reason not to, unless your reason is, “I’m a selfish asshole.”