Jeanine Pirro: Students Asking For Debt Relief Are Lazy and Should ‘Get a Job’

Quick history lesson: Ukraine is our ally, Vladimir Putin is a murderous dictator, and sedition against the United States is supposed to have serious consequences. Are we all caught up? Cool cool.

Now tell it to Marjorie Taylor Greene, who literally has nothing to do and so she uses her free time to be terrible for Twitter clout. The woman screaming about three GOP Senators being “pro-pedophile” while hanging out with someone being investigated by the FBI for sex trafficking teenagers sure knows how to draw all of the negative attention. Oh, and apparently now she loves Vladimir Putin, because Trump told her to? I’m not really sure how someone who claims to love America is taking up for America’s biggest enemy, but we’re living in the prequel to “The Handmaid’s Tale” while also being a Livestream of “Idiocracy” at all times now. 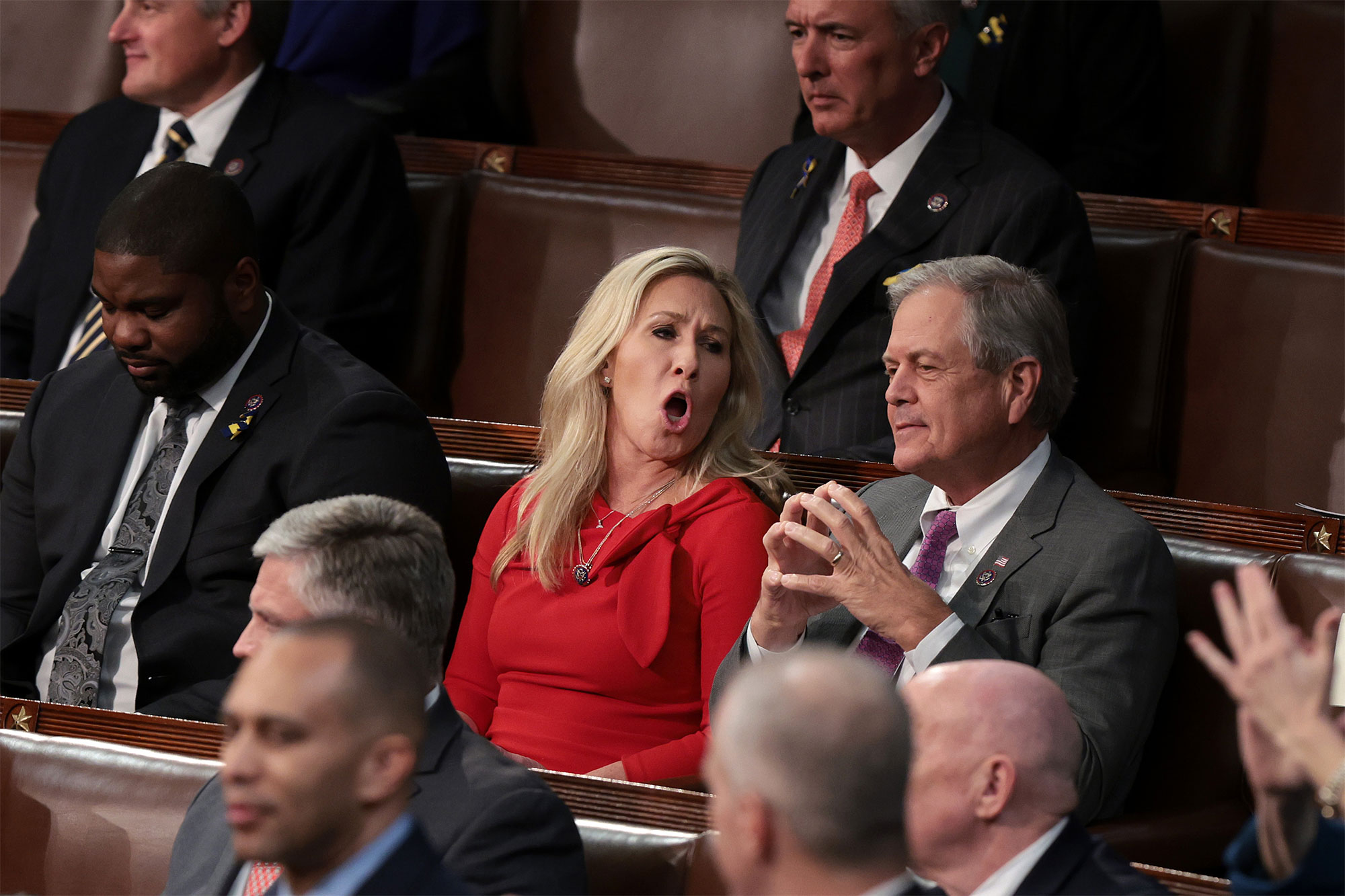 Marjorie MegaMouth seems really scared that she’s going to prison super soon, or else why was she disrupting the House’s Contempt of Congress hearings for Peter Navarro and Dan Scavino on Wednesday? If you’re afraid of getting in trouble, you’re supposed to be quiet and stay out of the line of sight, you Qidiot, not draw even more attention to yourself. I get that you want to be the sacrificial lamb for your Trumpgod, but it’s really not going to score you any cool points with the other ladies on your cell block, sorry to break the news. Unless you get to share your cell with a friend to use as a human shield, and I know just the person.

I’ve been begging for someone to be louder than the willfully obtuse MAGA minority, because we can’t keep coddling these delusional walking bottles of Mountain Dew. They lost. They’re not the smartest. They need to learn real American history. I’m not making any of this up, I’m just asking questions. Like, why is this woman like this?

We asked a Trump supporter if she’d rather have Biden or Putin as president. pic.twitter.com/UUqdM2ZEBd

Thankfully, Rep. Jamie Raskin (D-MD) is on the January 6th House Select Committee AND has a super loud voice, so he was able to shout down and shut down Marjorie as she tried and failed to disrupt the hearings that hopefully eventually will get to her and all of the other whiny traitors in the House (*directs a Jewish space laser at Jim Jordan*). Look at this glory. It’s the smartest drag in recorded history. Raskin used so many SAT words, I bet that Qidiot still doesn’t really know what he said. He also shut down “Kremlin” Kevin McCarthy by pointing out that the Republicans could’ve had their bipartisan, 9/11-style commission about January 6th, but they voted against it, so NYAH. Only he used the better words, because he’s Jamie Raskin.

Raskin response Greene Heckling: The gentlelady said something about the Russian hoax… if she wants to continue to stand with Putin and his bloody invasion, she is free to do so and we understand there is a strong Trump/Putin axis in the gentlelady’s party.. pic.twitter.com/aZQMRe4FmJ

.@RepRaskin: “We were going to have a 9/11-style commission…you know who vetoed it? The ‘4th branch of the government’ Donald Trump, who some of their members continue to slavishly defer to like sycophants.”
🔥🔥🔥🔥🔥pic.twitter.com/khr2uZ6sHh

@morgfair If you only watch one thing today, make sure it’s this clip of Jamie Raskin.
pic.twitter.com/CTVIGziXXx

[WATCH] ‘We Are Witnessing the Unraveling’ of Jan 6th ‘Cover-Up’

"There is a strong Trump-Putin axis in the Gentlelady's party" is the most intelligent burn EVER, I love me some Jamie Raskin 🔥

Also, Marjorie seems scared of being the next one held in Contempt of Congress, BECAUSE SHE SHOULD BE NEXT #ExpelMarjorieTaylorGreene @RepRaskin

WATCH: Freed From Russian Prison, U.S. Marine Calls Out Marjorie Greene For Voting Not To Demand His Release