What do you call someone who takes hundreds of thousands of dollars from someone and then drags that person to everyone who comes near them? I can think of lots of swear words, but for right now I’m specifically thinking you’d just call them the owner of the Appalachian Grill in Cartersville, Georgia.

Now, just hearing the name of the establishment and its location might conjure up some specific imagery, maybe some of it thanks to “Deliverance.” Are you imagining that your table is more like a bloodstained workstation where you have to render your own venison hides? It’s not quite that–they offer steak au poivre and live bluegrass music, so maybe you’d feel ok setting a spell over to the Appalachian. But wait! Not if you’re one of them libtards, then you can take your money somewhere else, Commie! Here’s the sign that greets you when you step up to the door of an establishment that seems to have more rules about dining out than the military. 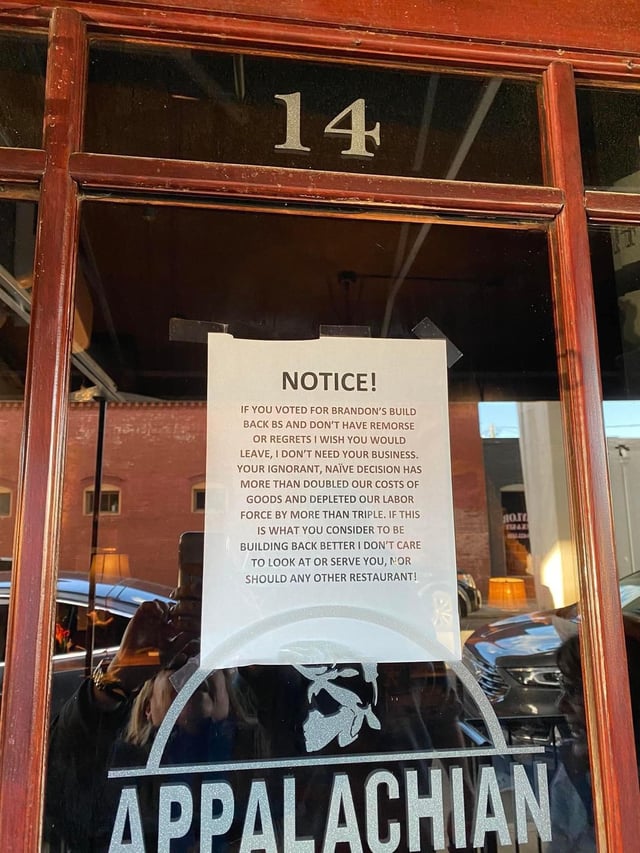 Did you catch all of that? They don’t need your business, Socialists! Take your China lab virus that Joe Biden made and all of your money someplace that doesn’t have “Whites Only” as a subtext for their service. They’ve posted other similar signs at different times throughout the pandemic that blame liberals for various things. I just find it weird that they claimed to be short-staffed when they took a big fat PPP loan from the Biden Administration to stay afloat during the pandemic. Oddly, they don’t have a sign explaining that part. Maybe they were too busy biting the hand that was feeding them while refusing to feed Democrats.

The MAGA Appalachian Grill in Cartersville, Georgia decided that if you voted for Biden, they don’t want to look at your ignorant face.

Oh & Biden forgave $300k in PPE loans for this asshole. I’m thinking they should pay those back right about now!#DemVoice1 #Fresh #BlueVoices pic.twitter.com/P3hiecUk9L

As the intrepid contributor that I am, I did my due diligence and tried to get an explanation from whoever wrote those eloquent notices. I mean, they remembered the diaeresis over “naïve,” so I did have a sliver of hope for an intellectual exchange. However, the hostess who answered the phone tersely let me know that there wasn’t a manager available and that she was absolutely not going to talk to me. As someone who used to work as a restaurant host, I can tell you she was extremely unprofessional and that there was probably a manager standing right next to her who ordered her to answer questions like mine the way she did so he wouldn’t have to.

I called and the host woman told me there’s no manager available and she refused to speak to me, so I’m going to really enjoy writing about this later 😈 #TheResistance https://t.co/tPy1iSqXPE

ANYWAY, if you’re driving through Cartersville, Georgia, and you have a hankering for some Sea Scallops Arrabiata very far away from any ocean, maybe just keep going until you reach the water.

WATCH: Roger Stone Describes Satanic Portal At The White House — Can You See It?