The Florida man who grabbed House Speaker Nancy Pelosi’s podium and posed for photographs with it during the U.S. Capitol riot was sentenced on Friday to more than two months in prison.

The image of Adam Johnson smiling and waving as he carried Pelosi’s podium went viral after the pro-Trump mob’s attack on January 6, 2021. Johnson placed the podium in the center of the Capitol Rotunda, posed for pictures, and pretended to make a speech, prosecutors said. After driving home, Johnson bragged that he “broke the internet” and was “finally famous,” prosecutors said. They argued that his actions at the Capitol “illustrate his sense of entitlement and privilege.” 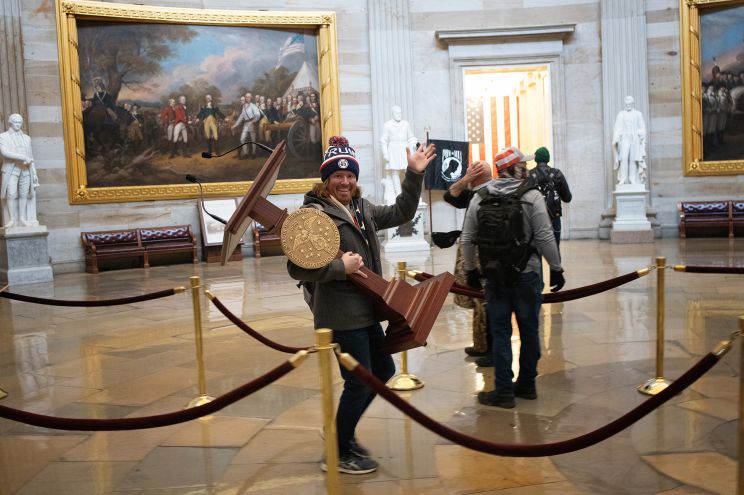 Johnson was arrested two days after the deadly riot. He pleaded guilty in November to a charge of entering and remaining in a restricted building or ground, a misdemeanor punishable by a maximum of one year in prison.

Prosecutors said they received a tip during plea negotiations with Johnson that he intended to publish a memoir. His plea agreement includes an unusual provision that requires him to relinquish compensation from any book, script, song, interview, or product bearing his name or likeness, for up to five years. “The now-viral podium photo portrays Johnson as confident, arguably gleeful, while converting government property to his own use during an unlawful siege,” a prosecutor wrote in a court filing.

“What happened was a terrible, terrible violation…of the legislative branch by the president of the United States.” Speaker of the House Nancy Pelosi describes the moment Capitol Police pulled her from the podium as a mob swarmed the halls of the Capitol. https://t.co/oHNUitL2Wm pic.twitter.com/qdUziiwHPe

U.S. District Judge Reggie Walton sentenced Johnson to 75 days in prison followed by one year of supervised release. The judge also ordered Johnson to pay a $5,000 fine and perform 200 hours of community service. Johnson will report to prison at a date to be determined. Johnson told Walton that posing with Pelosi’s podium was a “very stupid idea.” Judge Walton said America “is on a dangerous path” when many citizens believe that they “have a right to do whatever in order to have the person who they want in power sitting in the White House.”

Report: Trump is Thrilled About Weisselberg Indictment, Thinks it Will Hurt Joe Biden

A Florida man who took Nancy Pelosi's podium during the Capitol mob attack was sentenced to 75 days in prison.

Prosecutors requested 90 days. Adam Johnson is among just about 750 charged for the Jan. 6 attack, out of an estimated 2,500 who sought to overturn the election. pic.twitter.com/ITBYRdQGi3

More than 750 people have been charged with federal crimes related to the riot. More than 200 of them have pleaded guilty, mostly to misdemeanors. At least 100 riot defendants have been sentenced, and more than 80 others have trial dates this year.