What would Dudley Do-Right do?

A standoff between Canadian police and protesters blocking a key bridge to the United States continued on Saturday, more than seven hours after authorities moved in seeking to end the occupation of one of the Northern border’s most vitally essential trade corridors. Demonstrators opposing the government’s strict pandemic restrictions have occupied the Ambassador Bridge for the fifth straight day, snarling international trade and prompting President Joe Biden to call for an end to the siege. But there was still no sign when traffic would resume. 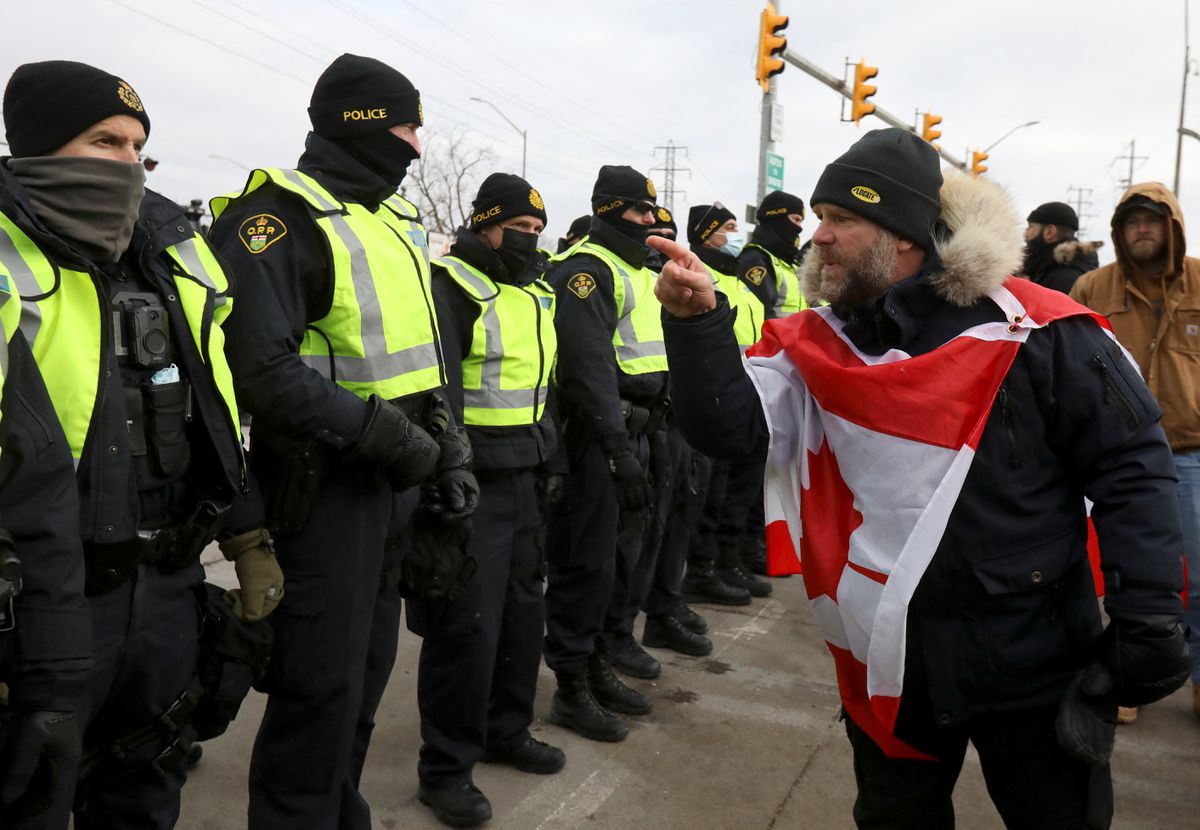 Ottawa Police said they were waiting for reinforcements to end the “unlawful occupation” in the capital. Demonstrators there “exhibited aggressive behavior towards law enforcement” and tore down a fence that had been erected around the National War Memorial. Protests have spread to three border points: the Ambassador Bridge, strangling trade between the two countries, and two smaller crossings in Alberta and Manitoba.

Protests in Ottawa against vaccine mandates saw a convoy of trucks descend on the centre of the Canadian capital.

There were swastikas and other Nazi imagery, public urination, harassment of a local soup kitchen, and national outcry over the treatment of a statue.#DemVoice1 https://t.co/e2mEC8NwHu pic.twitter.com/9UEVj9oRae

The Ambassador Bridge is North America’s busiest land border crossing. Since Monday, protesters in trucks, cars, and vans have blocked traffic in both directions, choking the supply chain for Detroit’s carmakers. Swastika flags and signs supporting Donald Trump could be seen in the crowd, indicating the crowd is comprised of the same people blaming President Biden for the slower international supply chain.

It is not Joe Biden’s fault that a bunch of stupid science-denying truckers are occupying a bridge in Canada & deliberately blocking deliveries to the US #AmbassadorBridgeBlockade https://t.co/sZYaUfXTv9

Police have successfully pushed back protesters from the foot of the Ambassador Bridge, but more people were streaming into the area and the operation appeared to have stalled. Some Canadians, frustrated by the days of obstruction from the protesters, questioned what was behind the delay, given the order issued by a court on Friday to end the blockade and the imposition of a state of emergency declared by Ontario authorities.

Using children as human shields is what terrorists do. pic.twitter.com/DkRirdZjdl

The protests have inspired similar convoys and plans in the United States, France, New Zealand, and Australia. In Paris, French police fired tear gas at demonstrators on the Champs Elysees avenue on Saturday shortly after a convoy carrying protesters against COVID-19 restrictions made it into the capital. A convoy of motorists in the United States is planning to head to the waterfront in Port Huron, Michigan, in support of protesters in Canada. And another U.S. group said two separate vehicle convoys will converge this weekend at the Peace Bridge, another U.S.-Canadian border crossing in Buffalo, New York.