“U.S. Secret Service was made aware of a security threat at a school where the Second Gentleman was meeting with students and faculty,” an Emhoff spokeswoman said in a statement shared with the press. 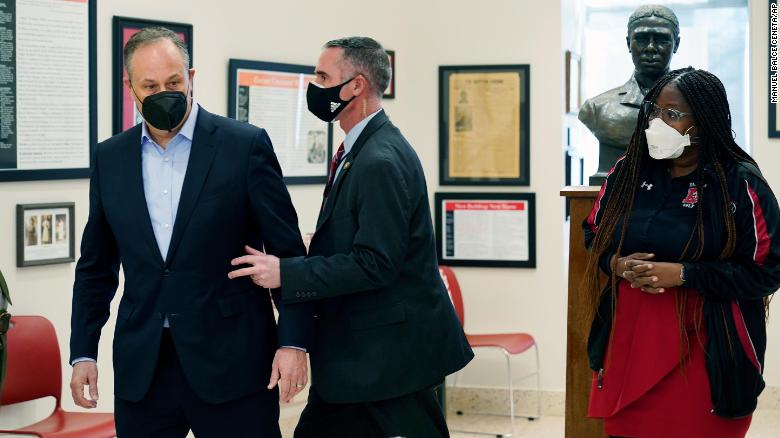 The Second Gentleman’s spokeswoman said he “is safe and the school has been evacuated. We are grateful to Secret Service and D.C. Police for their work.”

Emhoff had planned to meet with students at Dunbar High School to highlight a program they’re participating in, in partnership with the National Park Service, “that helps them relate to history on a personal level,” Emhoff’s office said. District of Columbia Public Schools press secretary Enrique Gutierrez told reporters at the event that a bomb threat had been called into Dunbar High School in Northwest Washington, where Emhoff was holding an event.

U.S. Secret Service was made aware of a security threat at a school where the @SecondGentleman was meeting with students and faculty. Mr. Emhoff is safe and the school has been evacuated. We are grateful to Secret Service and D.C. Police for their work.

Vice President Kamala Harris has been in touch with her husband since the evacuation and “he’s OK,” a White House official said. A spokesperson for the Metropolitan Police Department confirmed to CNN that a bomb threat had been made. Later, the spokesperson told CNN the security threat was made by telephone and the investigation is ongoing.

Kamala Harris' husband Douglas Emhoff was evacuated by Secret Service agents during a visit to a school because of "a security threat."

USSS agent said, "We have to go," and he was immediately rushed away. pic.twitter.com/SEm4USIh6Z

White House press secretary Jen Psaki told reporters at Tuesday’s news briefing that she did not have any updates on the situation but would update if the White House gets more information during the briefing.

This just angers me. Mr. Emhoff is Jewish. I wonder if it was a threat due to that or due to who his wife is, or what. But it is just more of the same garbage we see daily in this great country of ours. People are so uncivil and angry. This is cowardice. #DougEmhoff https://t.co/bYIkaguHU4

The DC Police Explosive Ordinance Disposal Unit is on the scene at the school, according to Metropolitan Police.

Doug Emhoff, the second gentleman of the U.S., was escorted from D.C.’s Dunbar High School by the Secret Service on Tuesday as a result of a ‘security threat.’ pic.twitter.com/5a5Xhrsk9r